I started this service because I was getting fed up entering data into a dozen different, specialized tracking apps that never quite have the data fields I need, and using spreadsheets doesn’t seem like much fun, either. 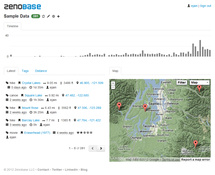 You can check out my “dashboard”, or start entering your own data–no sign up required. Then let me know how this tool could be made useful to you!

Wow, I’ve been looking for something like this for quite a while. I was using fluxtream, which now seems shut down, but was never satisfied with the view alternatives.

I think it would need some more simple pre-made visualizations or guides that help you make some comparisons. With that, I think the biggest problem is that it’s not findable. Even when searching this forum a year ago, I did not find this post!

How would I go about if I wanted to add an importer/connection to another system, like garmin or polar?

From today I also have an android wear watch (Polar M600), so I think I’ll make a simple progressive web application that posts my tracking of headache pills

Zenobase is really just a wrapper around Elasticsearch, with a basic UI and some importers

Well, hosting an elasticsearch (which in my default setup just drains my home server), importers and a nice visualisation builder is most of what’s needed. I’ve been trying to do visualisations in kibana, but it lacks some of the things I’d like to do.

One thing I’d like is a time-of-day aggregation, and there is already the day-of-week in zenobase… Haven’t played with it much yet, but I still think marketing is the only thing keeping it from going viral for the wider qs crowd

One thing I’d like is a time-of-day aggregation, and there is already the day-of-week in zenobase.

Not sure I’d want Zenobase to go “viral” at this stage, would be a support nightmare

Your comment got me thinking! If support is your main fear, I think your years of contribution to the QS community could be a resource, as even commercial projects are crowd sourcing support to user communities, often much less developed that the QS community. Anyway, I know you’ve thought about this quite a bit, but just saying… we have your back!

It’s definitely great to have a resource like this forum where you can refer people who have questions about experiment design etc!

To follow-up a bit…

I ended up going for Google Data Studios for now instead, it connects to Google Fit and Sheets, and I’m transferring my older data to that (have scripts to move heartrate from fitbit and garmin to google fit).

I expanded their Google Fit connector to also fetch heart rate, but it needs improvement, since a full year’s dataset errors out on “too much data”, so I should use their aggregated API instead.

The result is quite much like zenobase, but with less connectors to body trackers, and more ways to make visualizations.

It does pose privacy concerns of course, being Google…

Zenobase could trump this generic data studio setup by having more guided setups, like making dashboards with common visualizations like activity-time and weight or sleep quality over last year compared with year before etc. And, by making suggestions on how and what to track. Even if I have my HR data for 4 years now, there’s a lot missing to make good correlations. Digging into it now many years later makes me wish I had tracked some other stuff more over the years, but at least I’ve added manual tracking of projects (like my current two-week keto diet) and travels (which often show up in my graphs by the head ache and more walking).