Relationship Between Data and The Election of Trump-Article

This article suggests that Trump won contrary to the predictions of old-school statisticians because new school statisticians used personal data, such as facebook activity, to display targeted ads while the Clinton campaign did not make as much use of such strategies.

“The strength of their modeling was illustrated by how well it could predict a subject’s answers. Kosinski continued to work on the models incessantly: before long, he was able to evaluate a person better than the average work colleague, merely on the basis of ten Facebook “likes.” Seventy “likes” were enough to outdo what a person’s friends knew, 150 what their parents knew, and 300 “likes” what their partner knew. More “likes” could even surpass what a person thought they knew about themselves.”

I’d already done it before, but with interest renewed I did the facebook and text sample analysis again at https://applymagicsauce.com/demo.html. I’d say its 75-80% accurate. It was only based on 32 likes and most of those were stupid tv shows I liked 11 years ago. The text predicted my age extremely well. I’d say I’m way more neurotic than it claims me to be, but I’m flattered.

I put a collection of trump’s latest tweets into the magic sauce generator, cause I was hoping it would tell me he was a 12-year-old girl and that would he hilarious, but it told me he was a 40+ year old, 99% masculine, liberal, laid back, hard-working, competitive, introvert, with 54% leadership capability. Hmmm.

Here is the text if you want to copy to https://applymagicsauce.com/demo_text.html and see:

Thank you to Prime Minister of Australia for telling the truth about our very civil conversation that FAKE NEWS media lied about. Very nice!
Professional anarchists, thugs and paid protesters are proving the point of the millions of people who voted to MAKE AMERICA GREAT AGAIN! A new radical Islamic terrorist has just attacked in Louvre Museum in Paris. Tourists were locked down. France on edge again. GET SMART U.S. We must keep “evil” out of our country! Meeting with biggest business leaders this morning. Good jobs are coming back to U.S., health care and tax bills are being crafted NOW! Iran is playing with fire - they don’t appreciate how “kind” President Obama was to them. Not me! Yes, Arnold Schwarzenegger did a really bad job as Governor of California and even worse on the Apprentice…but at least he tried hard! Iran was on its last legs and ready to collapse until the U.S. came along and gave it a life-line in the form of the Iran Deal: $150 billion Iran has been formally PUT ON NOTICE for firing a ballistic missile.Should have been thankful for the terrible deal the U.S. made with them! Attending Chief Ryan Owens’ Dignified Transfer yesterday with my daughter Ivanka was my great honor. To a great and brave man - thank you! Congratulations to Rex Tillerson on being sworn in as our new Secretary of State. He will be a star! If U.C. Berkeley does not allow free speech and practices violence on innocent people with a different point of view - NO FEDERAL FUNDS? Do you believe it? The Obama Administration agreed to take thousands of illegal immigrants from Australia. Why? I will study this dumb deal! Iran is rapidly taking over more and more of Iraq even after the U.S. has squandered three trillion dollars there. Obvious long ago! Everybody is arguing whether or not it is a BAN. Call it what you want, it is about keeping bad people (with bad intentions) out of country! Hope you like my nomination of Judge Neil Gorsuch for the United States Supreme Court. He is a good and brilliant man, respected by all. Getting ready to deliver a VERY IMPORTANT DECISION! 8:00 P. When will the Democrats give us our Attorney General and rest of Cabinet! They should be ashamed of themselves! No wonder D.C. doesn’t work! Nancy Pelosi and Fake Tears Chuck Schumer held a rally at the steps of The Supreme Court and mic did not work (a mess)-just like Dem party! The Democrats are delaying my cabinet picks for purely political reasons. They have nothing going but to obstruct. Now have an Obama A.G. The American dream is back. We’re going to create an environment for small business like we haven’t had in many, many decades! Where was all the outrage from Democrats and the opposition party (the media) when our jobs were fleeing our country? I have made my decision on who I will nominate for The United States Supreme Court. It will be announced live on Tuesday at 8:00 P.M. (W.H.) If the ban were announced with a one week notice, the “bad” would rush into our country during that week. A lot of bad “dudes” out there! There is nothing nice about searching for terrorists before they can enter our country. This was a big part of my campaign. Study the world! protesters and the tears of Senator Schumer. Secretary Kelly said that all is going well with very few problems. MAKE AMERICA SAFE AGAIN! Only 109 people out of 325,000 were detained and held for questioning. Big problems at airports were caused by Delta computer outage,…Senators should focus their energies on ISIS, illegal immigration and border security instead of always looking to start World War III.

While I believe pretty much nobody here supports Trump, the QS forum is not really a political platform. Interesting stuff though.

I entered some text from my 750Words daily journal.

Did they get it right? 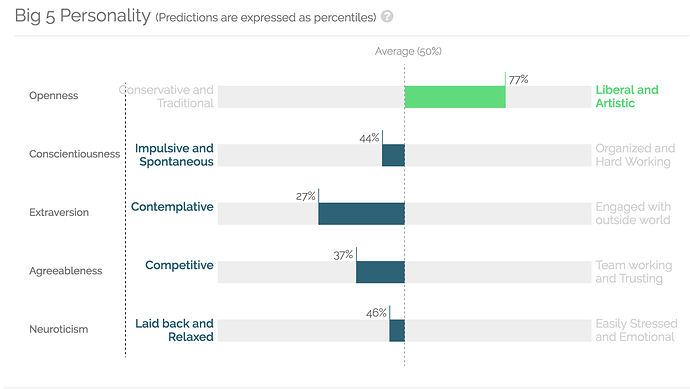 Wow. That personality prediction tool is spooky good. It found the ages of two emails from two native shaker friends perfectly, and the ages at which I wrote two essays within two years of the actual age I was at the times.

It showed me as over a decade younger than I really am.