Beddit is shipping to backers

It looks like I should be getting mine within a week. 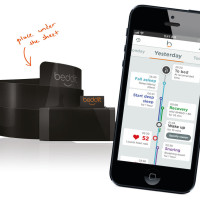 A Beddit sensor tracks your sleep quality, heart rate, and breathing under the sheet while sleeping. | Check out 'Beddit - Automatic sleep and wellness tracker.' on Indiegogo.

We are super excited! All the white sensors are on their way to you. The US shipments are in the hands of our US based fulfillment partner and will be at your doors next week, starting Monday the 13th of January. 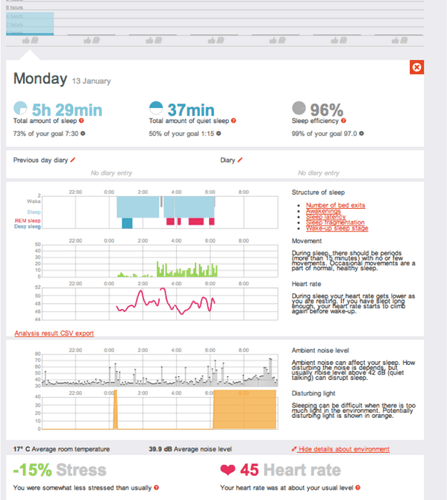 I just received my Beddit unit.

Does anyone know if the MAGNITUDE of movement (acceleration) can be obtained from the Beddit unit? I have RBD and want to know when I move a little or a lot during the night and when. So I need the magnitude of movement plotted or quantified by time. I can use the Zeo unit to see if this occurs during REM. The information provided by McGee, above, seems to show the Beddit gives NUMBER of movements per period with time, but not necessarily magnitude.

The information provided by McGee, above, seems to show the Beddit gives NUMBER of movements per period with time, but not necessarily magnitude.

I think the photo above the linked to is a from someone affiliated with Beddit. Backers do not seem to have a way to get all of those reports as of yet. They shipped it without an Android app while it says Android on the box. Seems like they will be adding more software as its completed. The hardware has potential.

Some comments on Indigogo are the same sediments I am going through. This comment sums it up pretty well.

Well, don’t worry too much about not receiving yours, several listed features are simply not there. You can use any of the sleep tracker apps for the same results. Heart rate is averaged, breathing rhythm is missing, noise/light report is missing, sleep stages (REM, deep) are not shown and it’s not any more accurate than the app I compared it with either (in fact, the app was more accurate by a few mins, pretty sure.)