Has anyone tried the Emfit QS sleep monitor? It’s marketed as in a higher sensitivity class than the Beddit, and the readout shows indeed a lot more data, including Heart Rate Variability (HRV).

I’ve used both for a while, albeit irregularly, and not under optimal conditions (very large mattress, + partner, while the strips are intended only for one sleeper). The overall impression was that the devices generally agreed, though sometimes gave conflicting readouts, and sometimes mis-classified sleep for non-sleep and counted non-existed bed exit events. The Beddit was repeatedly surprisingly accurate at detecting when I fell asleep.

Here are two screenshots that I’ve matched on the time axis. The sleep stage identification coincides among the two pretty well. 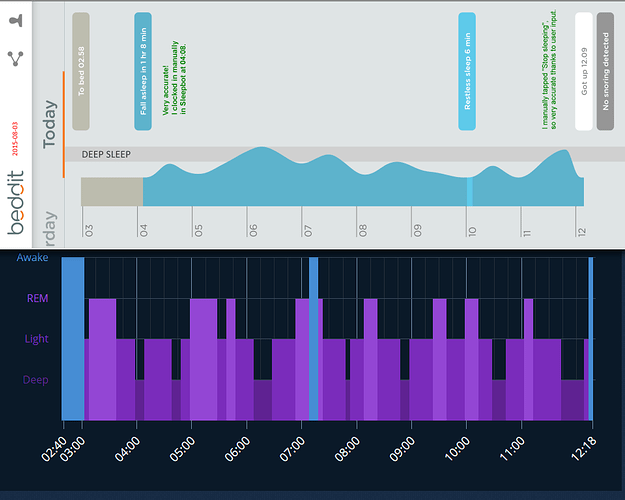 I have been using both devices for a while now, but haven’t done a proper comparison yet. I also noticed that the Beddit works very well for detecting when I fall asleep, but it rarely detects when I wake up…

I’ve started looking at some Emfit QS plots. The first that jumped out was that it thought I was asleep while I was actually watching a movie in bed and moved around quite (I know, not the best sleep hygiene - blame the girlfriend ;)). Anyway, the Emfit band covers only half the bed and I was roughly in the middle. This seems to be a data interpretation problem rather than a sensing one, because breathing was clearly detected only after I actually went to sleep around 2:45AM:

This false positive is quite common. Here is another Sunday afternoon movie:

Notice how no breathing was detected:

I’ll reach out to the Emift CEO with this feedback - maybe they can adjust their sleep phase detection algorithm to consider no breathing = awake.

Does anyone have any experience getting data out of the emfit? It seems like I can only download one day at a time.

Hi, I use Sense https://hello.is – which is “OK” just based on “eye-balling” the data but the EMFIT (esp. the integrated HRV measurement) looks pretty interesting. Any experience with that aspect?

Hi, I use Sense https://hello.is – which is “OK” just based on “eye-balling” the data

I wouldn’t recommend the Sense.

Has anyone had any success downloading the data from emfit site? Still seems like can only download one day at a time still

I’m thinking of using a screen-scraper to download multiple days - anyone else done this either?

Since gist comments don’t send comment notifications, it’d be great to put that code in a regular repo, so people can submit PRs/file issues/ask questions.

The lack of comment notifications is surprising, but this is a one-off script I don’t intend to maintain or support. If anyone has any questions, here and now is the only opportunity

That is fantastic, just what I was looking for. Thanks Eric!