I am not sure I am thinking about this right, but I guess that most of my calorie estimates are within about 50 calories per item. Now if I eat about 18 items a day this translates into a (rough) uncertainty of sqrt(185050) or about 200 calories … this is about 10% of my daily calories.

Not sure if I am reasoning this correctly… of course this says nothing about if I skip recording foods or entire days… just thought it was cool to see the law of large numbers in practice.

I don’t think that reasoning is correct, as you aren’t repeatedly sampling the same item with a random error.

As a worst case example, let’s say you were having nothing but Soylent. If their calorie count was off by 50 calories per serving, the % error wouldn’t shrink, no matter how long you stay on that diet.

On the other hand, you might consume a larger variety of different foods with both over- and underestimated calorie counts over a longer period of time, and manually created portion sizes might even out more.

An interesting topic to me.

I am wondering if we are talking about two types of measurement error:

Observational error (or measurement error) is the difference between a measured value of a quantity and its true value. In statistics, an error is not a "mistake". Variability is an inherent part of the results of measurements and of the measurement process. Measurement errors can be divided into two components: random error and systematic error. Random errors are errors in measurement that lead to measurable values being inconsistent when repeated measurements of a constant attribute or quanti...

I believe that we have both sources of error in calorie counting. In the case of Soylent the company that provides the calories per unit could provide a biased number (e.g. consistently off by 10 kcal/100 grams). However I could introduce random variations by inaccurately measuring my daily portions.

We know for a fact that the published calories on food have inaccuracies. Most calorie estimates are based on the Atwater system

According to the National Data Lab (NDL), most of the calorie values in the USDA and industry food tables are based on an indirect calorie estimation made using the so-called Atwater system. In this system, calories are not determined directly by burning the foods. Instead, the total caloric value is calculated by adding up the calories provided by the energy-containing nutrients: protein, carbohydrate, fat and alcohol. 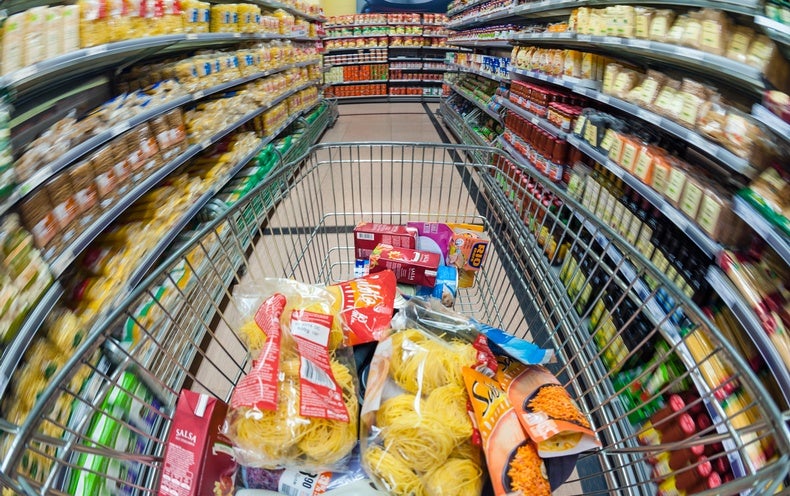 How Do Food Manufacturers Calculate the Calorie Count of Packaged Foods?

Jim Painter, an assistant professor of food science and human nutrition at the University of Illinois, explains

But we know these measurements have inaccuracies.

So we have biased estimates. And we have random error. I think the random error due to my measurement error is likely to end up being normally distributed as has been argued.

In probability theory, the law of large numbers (LLN) is a theorem that describes the result of performing the same experiment a large number of times. According to the law, the average of the results obtained from a large number of trials should be close to the expected value and will tend to become closer to the expected value as more trials are performed. The LLN is important because it guarantees stable long-term results for the averages of some random events. For example, while a casino may...

I think of calorie counting as a system that “approximates” calorie intake subject to both systemic and random error. And don’t forget to add in error in the critically important estimates of basal metabolism rate and calories burned in exercise. My various exercise monitoring applications / devices give me substantially different calorie estimates and the ones that are “built into” the apps like Fooducate and MyFitnessPal no longer are even within 50% of my heart rate based estimates as I have gotten more fit.

Therefore I juggle my goal calories to get the outcome I want.

I should say that I seem to be able achieve a stationary process. Or a stationary + a trend (steady slow weight loss). I take this as a sign that I am able to balance out the various biases between the inputs (kcal eaten, kcal burned = BMR + exercise). Perhaps wishful thinking on my part. Very many nutritionists would tell you that long term dieting does not work.

Best of luck to all of us struggling with slowing BMRs and way too much temptation.

I am kind of curious though if any dieting studies have been done where all the participants do is log the number
of items they eat each day instead of caloriies. I have been losing weight but my estimated calorie intake in pretty consistent, however my number of items I log has been decreasing (please excuse my crude graphs): 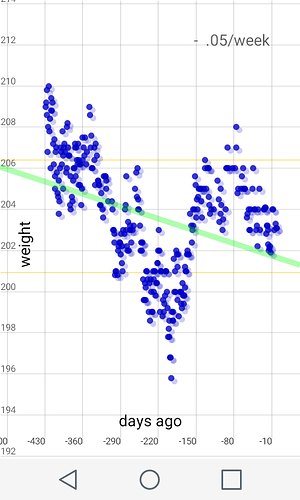 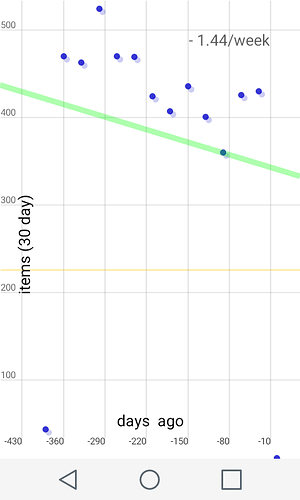 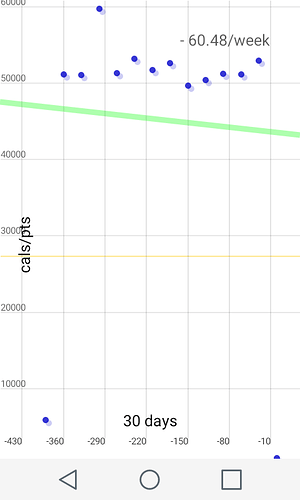 I suspect my weight went up after Christmas because we have a rather harsh winter here and my metabolism slowed down.

It also seems that my average calories per item vs items is somewhat linear: 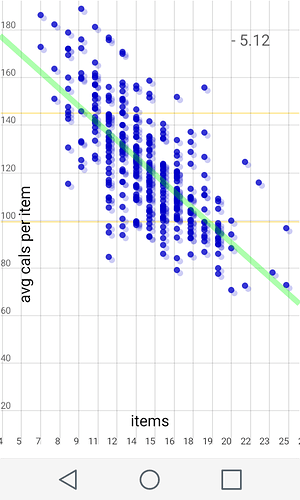 Just wondering why nobody has tried using something so simple as counting daily items for a very long period of time?

Counting items is novel and interesting. Would make a great QS Show&Tell talk. Where do you live? I suspect that if you gave a talk on this at one of the more active meetings you might meet somebody who has done or seen something like it.

Thanks! Unfortunately I think the nearest QS meeting to Western New York is in Toronto which is a couple of hours drive from here.

I am having pretty good luck with my app: 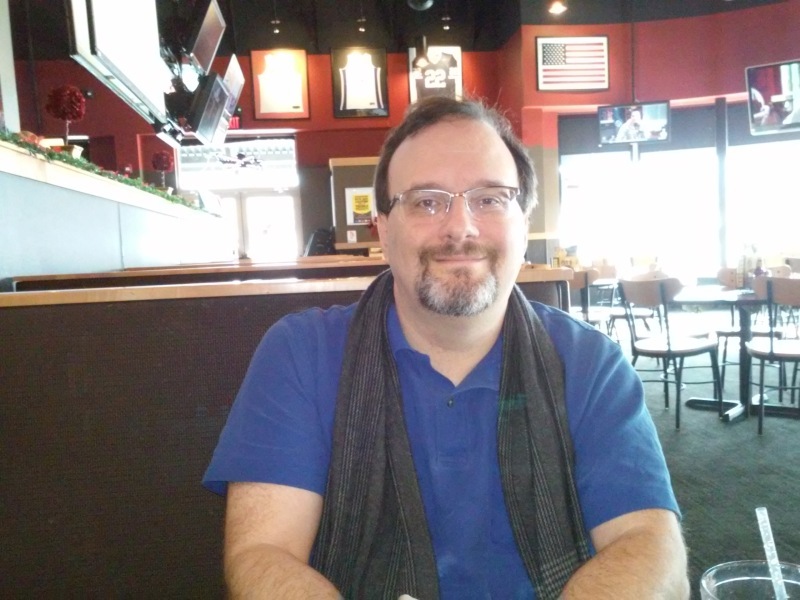 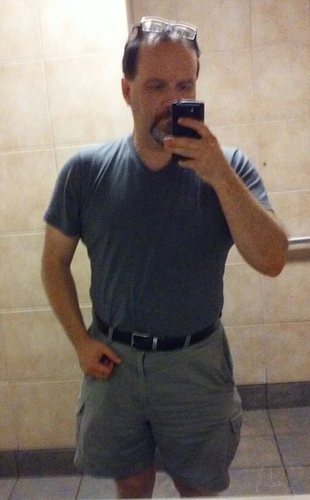 If there are any iOS developers out there, I would love it if you could port my app to iPhones. Just would need you to cut me a piece of the sales if you need my help! 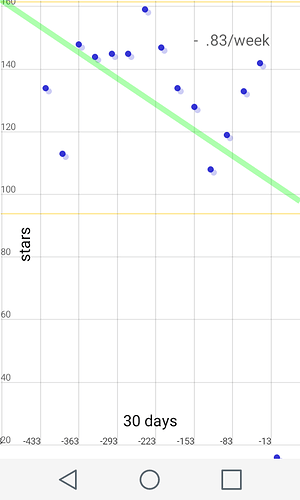 I just noticed today that my intake of fruits and veggies (“stars”) went down right about the time that I started gaining weight after Christmas. I hadn’t noticed before because I just added monthly aggregate graphs a little while ago. I generally try to get about 5-7 servings but I probably slipped up in winter and didn’t realize it.

Thanks… yes I used MFP for about 3 years straight but got tired of entering data by typing. BMR estimates are good initially but tend to estimate too high since my meds might slow my metabolism down a bit. Calorie counting is very noisy but seems to work if you can maintain a calorie deficit for months at a time… In order to do that I had to watch for sugar spikes, carbs, insomnia, stress…