Regarding future evolutions of hGraph, I would be interested in the following: 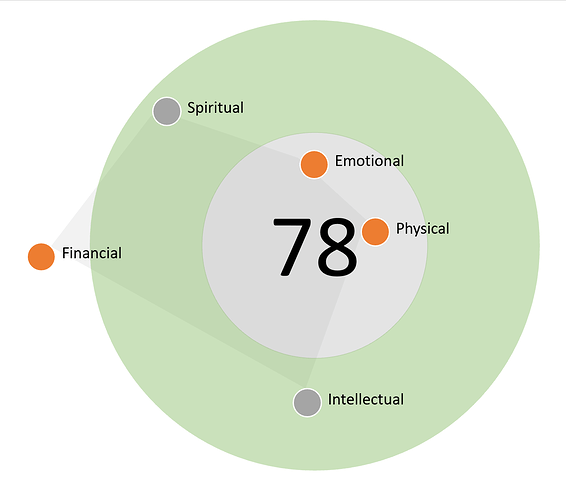 Very cool. I’d love to integrate this into some projects I’m working on.

The healthy/unhealthy ranges - do you envision that being set by set in each implementation, or would there be a single algorithm to do that?

Hi Edward,
I assume you are referring the the general hGraph visualization and the overall score (i.e. hScore) at the center of the graph? Is there a single algorithm for hScore or it varies with each implementation?

The company behind the hGraph (goinvo) seems to be thinking along your lines, they have a github project called hScore and the idea seems to be a single algorithm (even if the project is absent of code at the moment but does show activity in last three months). As a side note, hGraph was mentioned on this forum five years ago, I believe it has evolved a bit since then, and I understood there is an iPhone hGraph app coming shortly. So something is moving in that project.

In my case, i am exploring a custom algorithm to compute the overall score for well-being in my household. The algorithm works by calculating metrics across five dimensions of well-being that include Spiritual, Physical, Emotional, Intellectual and Financial well-being. The final score at the center of the graph represents the output of this model. For example, the “Physical” metric computes a score by factoring in overall Health, Activity, Nutrition and Sleep. The “Emotional” metric computes a score by factoring in Mood, Sleep, Socializing, Trips/Travel and so on.

Hi Sergio, yep that’s what I was getting at.

For example, let’s say we’re talking about sleep and we assume 8 hours is ideal. Where would we plot 7 hours? On the edge of the green, or out of bounds?

One small example but as I think about implementation I realize I would run into this issue across many different metrics. Seems quite subjective where the threshold between good and not good is.