[quote]
Tim Cannon is a software developer from Pittsburgh and one of the developers at Grindhouse Wetware, a firm dedicated to “augmenting humanity using safe, affordable, open source technology,” according to the group’s website. As they explain it, “Computers are hardware. Apps are software. Humans are wetware.”

The device Cannon had inserted into his arm is a Circadia 1.0, a battery-powered implant that can record data from Cannon’s body and transmit it to his Android mobile device. Because no board-certified surgeon would perform the operation, Cannon turned to a DIY team that included a piercing and tattoo specialist who used ice to quell the pain of the procedure. [Super-Intelligent Machines: 7 Robotic Futures]

The Circadia chip isn’t particularly advanced: All it does is record Cannon’s body temperature and transmit it to his cellphone over a Bluetooth connection. While this isn’t a huge improvement over an ordinary thermometer how analog! it does represent one small step forward in what will undoubtedly be a continuing march toward greater integration of electronics and biology.[/quote] 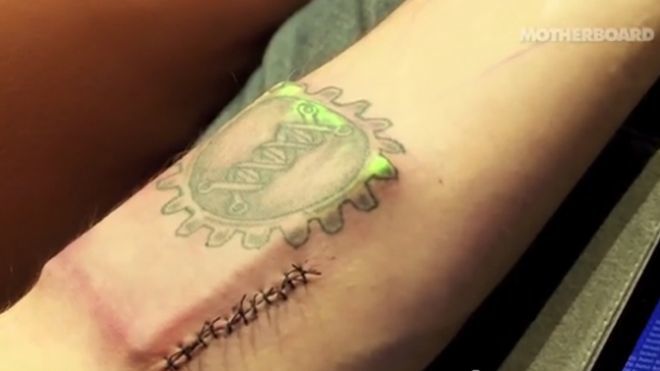