I have had a quantified-self idea for quite some time that seems highly valuable. I am not sure that anyone has begun work on this, but the utility of my proposed platform seems radically obvious.

The idea is pretty simple: make a really huge database, integrate it over time with existing databases where people track stuff, and allow people to enter daily and long-term tracking information (ideally by just uploading info from their connected devices). Then have data scientists identify insights to give personalized health recommendations (in tandem with doctors) and/or sell the insights to research groups. If it’s not obvious, the value comes from having hopefully tens or hundreds of thousands of people, discrete tracking, and very thorough/holistic measurements and then being able to run correlation analyses and machine learning algorithms to find X ACTION causes Y RESULT in people with Z CHARACTERISTICS.

There are 4 groups I know of that are doing something like this: Arivale, IBM, Amazon (AWS IoT), and Verizon. Arivale is definitely the closest to this project, but I’m not sure they have quite the same vision. I am not positive how big the community is, but I would think this could be something like a non-profit mutual fund or open source collaborative effort.

Anyway, my question is: Does this kind of platform already exist (is there a group I missed above)? If not, would the broader quantified self community have the size, time, and expertise to create something like this in an open-sourced venture? (It would require a handful of data scientists, developers, MDs/health PhDs, and some operations folks)…

Here is the slightly more detailed version I sketched out: 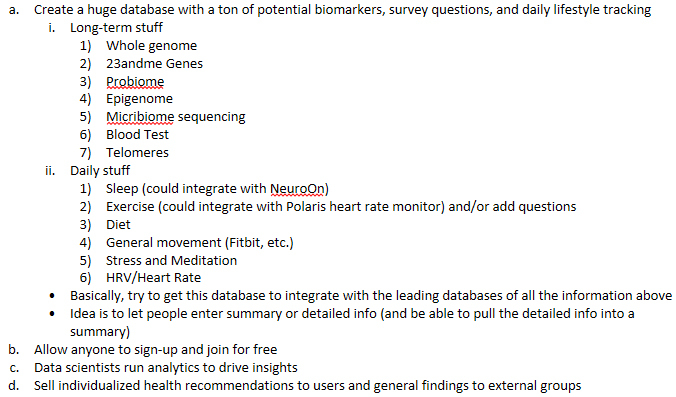 Open Humans is a non-profit that lets you share your data with researchers. They only support a couple of data sources right now, but are working on adding more.

Health Nucleus is similar to Arivale (but I don’t know how far along they are). Collecting enough data to even just maybe be useful is an expensive proposition…