I'm Said, wanted to introduce myself and say a huge thanks to all of you!

I feel this place has changed the course of my life and I’ve barely been here for long. I was eager to say hi but wanted to contribute something first so I did this experiment over the last week and I’m so grateful!

Here’s a little write up of my experiment. It aint much but it’s been huge for me.

I had a simple premise, I figured I’d spend more energy on being productive if I logged work time. Using notion I wrote a simple purpose, expected adversities and method, with an inline table for tracking. I had only four columns; current thought, what I worked on (filled in after ofc), number of uninterrupted blocks and lastly the start date with time.

What I tracked evolved as the week went on. I learned more about what I needed as I went. Such as the utility of a ‘logbook’ of sorts, to jot down relevant observations about the effectiveness of the experiment, what might help next time etc. More detailed theory crafting about nitty gritty details.

Results were about as I’d expect. Much more productivity. Hard to control for variants of course, as I have been doing many things to improve the quality of my life lately. So, not the most scientific, but my guts tell me there’s something big to this whole tracking thing, which is enough for me. My drive plummeted in the last few days struggling to cope with personal stuff. I think the fact I also decided to experiment with my morning routine had a huge impact on my mood. My next experiment will be focused on morning routine tracking and the discipline around waking up with intention.

I’ve been wanting to do this for a long time! The idea floated around, amidst so many other ideas it made prioritising seem like a job for an entire firm of project managers. But I got into Tiago Forte’s writing and it’s changed my relationship with time management in a big way. He randomly referenced Quantified Self in something he wrote and I knew from the second I found this place I had struck gold. Lurking for months and finally joining up has been really inspiring. I’m excited to write up my next experiment. I already have a few ideas to pick from of different things I want to focus on and experiment with! (It’s exciting, to think what can I work on next? I could improve anything!

Anyway, here are some of the better quality things I told myself;

Summary of stuff I learned;

So yeah, I’ve been really vibing on quantity over quality lately, I’m much more interested in moving quickly and breaking things as it has set me free from a lifetime of all theory no action.

Thanks for reading! Any thoughts or feedback on my write up? Anything glaringly obvious I forgot to include?

Thank you for joining and for the great intro post. Three things that may be helpful.

Thank you again for that very nice intro, it’s good to have you here.

I’ll l check out those recommendations. I’m so keen to meet others further along a similar path!

Those zoom meetings sound pretty dope I’d love to get in on that. The cards idea sounds fantastic, presentation lends itself immediately to focusing in on what’s important (I imagine that would make it much easier to resist getting caught in the weeds).

I’ll have a good dive into that tag before pulling the trigger on my next experiment. Thanks Gary!

Hello, @Said_Bouziane! Really happy to have you on the forums. As Gary mentioned, I’m currently engaged in a project looking at the effectiveness of a technique called “mental contrasting with implementation intentions”. It seems similar to the method you describe.

I’ve played around with Notion. Can you post some screenshots of how you used it for your project?

What aspect of tracking has been useful for you? Are you making insights from analysis of the data? Or is the tracking itself a way of causing reflection and you are learning from that?

Yeah cheers Steven, so glad to finally get involved. I love the sound of that method, it reminds me of some stoicism ideas I’ve been sitting with lately through Tim Ferris’ stuff. 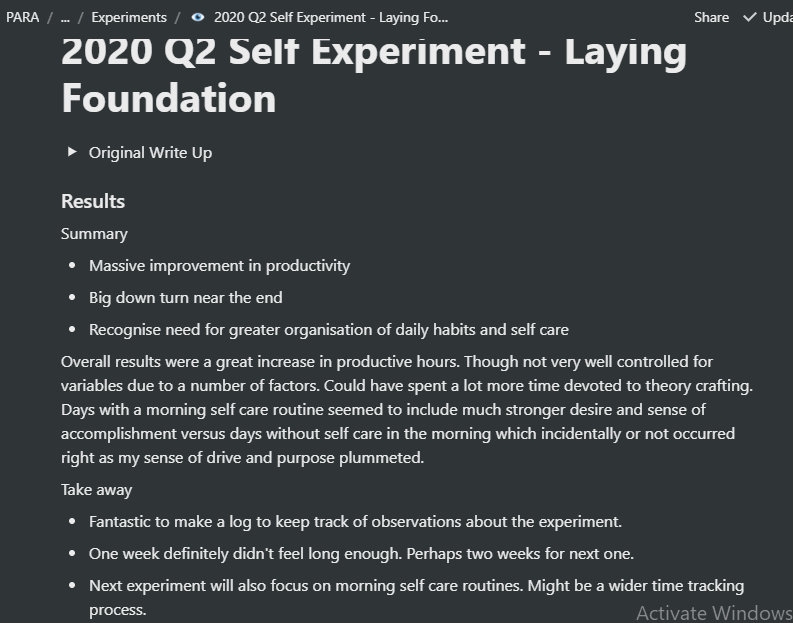 Screenshot_21050×547 46 KB
I like how Notion offers such easy manipulation of information. I can display and hide things, move things adjust stuff it’s all very simple and intuitive.

Tracking has helped to really extend my frame of reference. I can see further into my past, with more clarity. Without the record all I really have is a vague handful of impressions. Tracking makes calibrating for my future direction way easier.

Yeah I’m getting insights mostly emotional ones. I don’t think I’m analysing the data in the way you’re talking about, but to be honest I’m not sure. For example after the experiment I’m thinking, oh right, this day marked the beginning of a downturn in my mood, affect and productivity. It was also the only day I decided to shake up my morning routine, I ended up not getting any sunlight. Now I’m curious as to how important sunlight is to the way I feel.

So… qualitatively analysing? I guess it would be called?