Just starting quantifying all of my data

Hi, I just wanted to say hello to the QS community and wanted to say that I am examining the data that I get from my Basis Peak and blogging about my analysis at Basis Breakdown.

I would love to get any suggestions people have in terms of additional apps to enrich my analysis. Also any additional insights would be welcome. Thanks!

Body weight (and perhaps composition) seems like an obvious, low hanging metric to include.

I’m curious how well the sleep metrics correspond to your subjective feeling when waking up in the morning (and to how tired you get in the afternoon)?

Thank you for the suggestions. I think body weight and composition would be a good addition. I was also debating tracking food using MyFitnessPal or something like that.

Seeing a correlation between sleep metrics and energy levels would also be interesting. Do you have any suggestions for any apps that I could use to quickly log my subjective feeling?

Unless you eat the same, pre-packaged meals every day, food tracking can be very tedious… MyFitnessPal has the best nutrition database, but doesn’t let you export your data easily, and, like most food-tracking apps, doesn’t track what time of the day you ate.

There are a few specialized mood tracking apps like MoodPanda, but you can just as easily use a general-purpose tracking app like Trackthisforme, KeepTrack, or Nomie.

Yeah that’s why I was somewhat hesitant about doing food tracking, but if I generalized it by basic calorie intake and broke it down into percent from fat, protein, and carbohydrates, I might still be able to get something out of it.

I will definitely take a look at those to see if I can get better insights out of my data.

Unless you eat the same, pre-packaged meals every day, food tracking can be very tedious…

I’ve been tracking cafeteria meals at Google for ~2 weeks and indeed, it’s not just tedious, but error-prone. to figure out quantities, you need to get a good visual grasp of what 100g (or 1oz) of whatever you eat looks like, and then also get some nutrition information. For some items, certain macro-nutrients vary wildly depending on type or brand. For example, sour cream can have either 2 or 4 grams of carbs per 2 tbsp depending on whether it’s fat-free or not.

MyFitnessPal has the best nutrition database, but doesn’t let you export your data easily, and, like most food-tracking apps, doesn’t track what time of the day you ate.

So basically there aren’t any good options out there is what you’re saying?

But seems like you’ve also settled on MyFitnessPal. At least for the time being.

There might be a better food tracking app these days - it’s been two years since I’ve looked at meal tracking space.

Regarding body weight measurements, both the Withings scale (I’ve been using one for several years now) and the Fitbit Aria let you export data. The body composition values these scales produce seem plausible, though probably more “precise” than “accurate”, and can fluctuate widely if you have any water retention issues. Maybe use the money you saved with the bathtub to do some DEXA scans

I could basically get one scan a month for about 10 years for the same price. But the convenience of at-home tools is nice.

I wonder if anyone has any insight on the Skulpt? It claims to be 3-5 times more accurate than calipers, which if pretty impressive if it’s true.

Haven’t used the Skulpt, but @ShannonConners here is a fan. My understanding is that you have to be very consistent in how you do the measurements, which is something many people struggle with…

Yes, it’s important to be consistent with where you place the device but I have found it to be highly useful over the past 5 months or so. I have been working out with weights since junior high so I am long past adding any “new” muscle so basically any BF device for me will just track water weight changes due to workouts, diet (weekend bloat especially), hormones, etc (3 lbs is my water weight swing) and I might experience small body fat changes on the order of a few pounds at most in maintenance. I consider calipers very unreliable for me (I was measured at 11% and 14% a few years ago which was totally inaccurate and way too low). I had a DXA done two years ago and I was 17.5% overall BF. I think the Aim is pretty close to that for me now and I am within a few pounds of my weight when I had the DXA. I think the Aim measured me at 18% this morning. In comparison, I have found my Withings scale BIA measurements to be pretty much crap for me and I never look at that data. I know that some of the problem is that I just don’t have the patience to use a consistent water drinking protocol and wait for 20 minutes to pee or whatever before using the wireless scale in the morning which I know others have done to improve its consistency. I am all about taking my morning measurements and going on with my day. I am so happy the Skulpt lets me just measure when I get up without needing anything involved like that. Just for comparison’s sake, here is a graph of my wireless scale BF data vs data from the Aim. Basically the scale data is all over the place, and the Aim data actually tracks with my weight changes. I also included another cool graph I made of the weekend water bloat effect. Yes, that water bloat counts at lean mass. Seems so counter-intuitive to be bloated from the weekend and have a lower BF but that’s how it works. 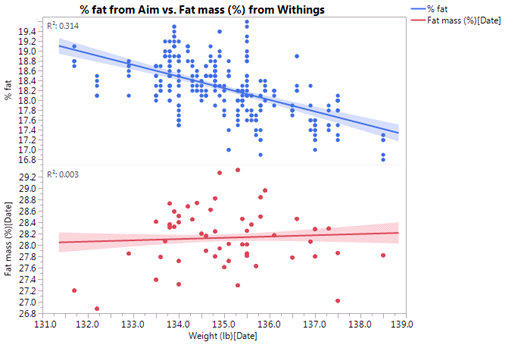 Shannon, any ideas why I got two quite different results from two DXA scans on consecutive days, while keeping most parameters I could control relatively constant?

DXA is just not very accurate generally. Your values look like they are within the normal margin of error of a DXA scan, around 5-7%. DXA is “guessing” a 3D distribution of tissues from a 2D image. MRI is much better

Since your weight was so close on the two days, I would also conclude technical variability of the machine. Most people only do one because of cost, so most of us don’t have the replicate data to prove it, but I’d guess you or anyone else could see that kind of variability even if you did one scan right after the next.

I don’t think the absolute number matters all that much in its accuracy, what matters is that you have a method you can use often and that it’s repeatable within day. My closest affordable DXA is 3 hours away, so there you have it.

I agree that in most instances having a method that’s more precise and easily available is more important than absolute accuracy. However, from all of your commentary, I’m still not sure what that is.

I guess just go with the best option you have readily available to you.