So I am trying to track my mood over time, and I have no idea how to go about doing that. I would like to do it in Google Docs with a form for convenience, and I want to create a few questions that would give me a number for my mood. I want it to be more informative than good or bad. Any ideas?

I find it useful to use an extremely blunt instrument for highly subtle and subjective measures, in order to reduce noise and avoid worries over whether I am consistent in my use of the scale. I like a three point scale:

This is designed to catch the extremes of good and bad, leaving a wide range of different states unexamined under “medium.”

But for other ideas, and some background on academic research, see this post: 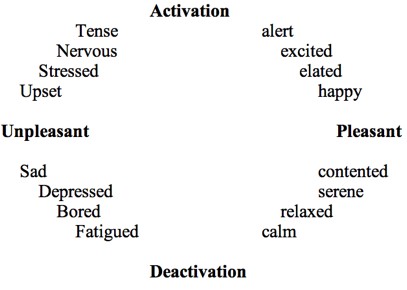 A post discussing the nuances behind designing experiments that track mood, including insights into the debate as to whether negative and positive emotions should be measured as polar opposite or considered states that can be experienced at the same...

I like Google Calendar to record mood (free text), because it’s easy to go back and find patterns and correlations with other things happening in my life.

I did this for a few months using twitter, there is an android app called The Android Diary found in the Google Play Store here < http://goo.gl/PZd3Z > it has the ability to put a notification in the notifications bar on your phone at timed intervals reminding you to make a note. It posts those entries to twitter. After analysing my data over a few months I found my mood was all over the place. But I thought I would give you the suggestion anyway.

I like Gary Wolf’s post, and the article he linked to. But I don’t like the idea that positive and negative emotions are not two ends of the same scale. Not because I don’t think you can be happy and sad at the same time. Rather, I think it assumes an incorrect model of the mind. I believe in Minsky’s Society of the Mind theory, that rather than a single entity the mind is a collection of mental agents. Each mental agent itself is a collection of other mental agents, until you get down to the minimal mental agents that twitch your thumb. My interpretation of feeling happy and sad at the same time is that one mental agent is happy while another is sad. In that view, positive and negative are still opposites on the same scale. The conflict only comes when you insist on viewing multiple mental agents as a single entity.

So it seems (to me) that a two dimensional scale with a characterization of the mental agent involved is the best way to measure mood. But then how do you characterize the mental agents? Well, in addition to being a fan of Minsky, I’m a fan of the Buddha. As a Buddhist, when asked to categorize feelings that include suffering, the obvious answer is “desire.”

So this week as part of my data collection I started to measure my moods by using a two dimensional value/energy scale, with three values in each dimension, and a tag for each mood specifying the desire involved in the emotion. I will start by trying to track my extreme moods as I have them. As I expand this habit, I may add to that a thrice daily check of my general mood (after getting up, leaving work, and getting ready for bed). I may also add in tracking of common events that I think affect my mood.

At least, that’s the plan. But it is clear that quantifying moods is no simple thing, and I intend to adapt my plans based on how the rubber and the road interact.

A method that I’ve thought about trying is to measure mood in binary. Our brains are basically a computer with on/off switches so my thought is to just measure happiness as yes or no (i.e. zero or one). Arbitrarily assign either answer to meaning yes you are happy or yes you are not happy. The point being that you can quantify your mood in this fashion. I have no idea if this method would work though it’s just a thought I had once or twice about measuring mood.

Whatever method you choose, hope you post an update here to show your results. Or look for a Google+ hangout online to share your experiences.

I’ll be posting updates on my Zen Quaker blog, there’s already a more detailed version of my post here and the first analysis of the exercise data I’ve been tracking for the past month. If things are at all active here I will try to cross post.

Be warned about the blog. It’s all sorts of random stuff you may not be interested in. The data tag and the data category might help narrow things down.

I have graphs of one week of my moods posted on my Zen Quaker blog, along with gobs of methodological babbling. Check 'em out if you’re interested.

Thanks, rumyzako. I now have a program that generates a weekly report of my QS data and outputs it as a web page. I’m trying to figure out the best way to post them to the internet. I’ll post here when I’ve got it straightened out.

You are all welcome to try our website. www.GrowHQ.com. Alternatively a good competitor is “moodscope”. Or try action 19 on action for happiness.

So I am trying to track my mood over time, and I have no idea how to go about doing that. … Any ideas?

I track mood currently using my Android smartphone and the app Tasker. I’ve setup Tasker to–every time I unlock my phone and at randomized intervals-- ask me my mood/affect/emotional state/etc. while it also logs about 3 dozen variables: location, photo of my face and what I’m facing at that moment, current weather conditions, recently open apps, content of what I’ve communicated recently and whom with, light level, air pressure, the direction I’m facing, strength of nearby electromagnetic radiation, all sorts of stuff. Amazing what you can mine out of a normal smartphone’s sensors and apps. From there, analyses aren’t too hard.

Tasker is pretty easy to setup, though it costs a few bucks. Well worth the price of admission for lifelogging. I’ve been able to avoid purchasing several dedicated lifelogging devices by using all the smartphone sensors instead.

I see this thread was started a long time ago, but I’ll throw these out there as useful trackers:

http://www.moodscope.com - This is web-based. It’s not mobile-phone friendly, but does come up okay on a tablet. What I really like about this site is that it uses a random numbered card method for statements like “I feel enthusiastic” or “I feel guilty.” After you answer all of the statements, it then calculates your score for the day. I feel like I get a truer picture of my mood this way since I don’t know their algorithm and the cards are randomized.

For iPhone (not sure whether or not there’s an Android version), I am liking iMoodJournal. It works on a 0-10 scale, which seems to make sense to me. Each level on the scale is defined. You choose the level, and you can add tags via hash marks in order to see more specific trends. The app also has a built-in reminder alarm that you can set for up to three times a day, prompting you to rate your mood at the same time(s) every day. I think that’s important since energy levels can affect mood.

Another option is to use the site http://www.optimismonline.com. This is more geared toward in-depth mood and symptom-tracking as well as seeing trends of how certain things (food, sleep, stress at home, etc.) affect your mood. There’s an iPhone app that syncs with the web site (not sure about Android).

As you mentioned using Google Spreadsheets and forms there is another simple enhancement to this.

If you have an Android phone and the “Tasker” application you can then create a number of widgets which submit the relevant data to the form e.g. Three widgetsone each for: Great, Medium & Terrible.

Makes the capture process about as seamless as you can get!

If you are an iOS user, check out the Lume Personal Tracker. Its free. There is a scale that you can use to track your mood. And it has charts to see your mood over time. Its very simple. https://itunes.apple.com/us/app/lume-personal-tracker/id712572824?mt=8

Just throwing MoodPanda.com in to the mix. [I’m part of the team, don’t want to appear spammy, just adding for discussion]

We recently rebuilt the entire site to be Mobile responsive, and we also have Android and iOS Apps.

The site not only allows self tracking [with a bunch of new visualisations added recently] but it is a support community of hundreds of thousands of people, who share in success and support in bad times

For quite some time I’ve used iMoodJournal on the iPhone. You can customize the scale they have based on numbers and/or terms. You can also add to each record some narrative, keywords and a photo. You can then export the data to excel to chart and analyze.

So I am trying to track my mood over time, and I have no idea how to go about doing that. I would like to do it in Google Docs with a form for convenience, and I want to create a few questions that would give me a number for my mood. I want it to be more informative than good or bad. Any ideas?

So where in a calendar do you put the mood? You just make it as an event? And then how can you dump this data to a file to analyze? Thanks.

I like Google Calendar to record mood (free text), because it’s easy to go back and find patterns and correlations with other things happening in my life.

Can you be a test user of an iPhone app that I created to track moods in fun and easy ways? This is not spam. This is real =)

Don’t ask to ask (: Just make the app available so people can start testing right away if they’re interested.

Hi everyone,
I am trying to quantify the mind. www.millie.health
I am trying to detect mood out of text or speech. Could I get your feedback and ideas on this?

Has anyone used Mood Patterns on Android? It has random sampling and let’s you create customer factors and log activities as well as customize what scales to track. I’m liking it so far but I’d prefer something which just writes to a Google sheet so I can do my own analysis easily. Any ideas?