New Idea for a Tracking App

I’m an app developer and playing around with an idea for a new app, that tracks…well everything.

To be specific, it would be an app that collects all your stats from the apps/websites/platforms that already tracks your stuff, and displays it on a single screen, updating in real-time. I’m building it first and foremost to scratch my own itch, having to log into 3/4/5 websites to track my money (investments on one platform, pension on another, bank’s website, stocks prices on Google Finance, etc).

I’m mainly looking at targeting this at the UK market first (and thus mainly integrating platforms that are UK based, or non-region-specific like Twitter/Instagram followers).

However this app could just as easily track anything you like, as long as it can be represented in one number. For example, Fitbit steps, Instagram followers, Tesco points, Oystercard Balance, Duolingo score.

The app is called Trakr, and here is a screenshot of the current prototype: 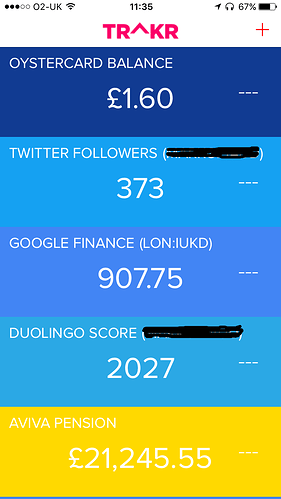 Would you be interested in this app? What scores/balances/points would you like to track? If we took all the right precautions security-wise (HTTPS, data encryption, etc) would you give it your credentials in order to collate all your tracking data?

Thanks in advance for any feedback!
Mark.

For people who have numbers they want to keep an eye on, this might be most useful as a “widget”, so there’s no need to open an app.

Thanks for the feedback. Yes a iOS “today widget” is in the works, along with an Alexa skill so you can check your numbers even without a phone altogether!

I feel the need for a consolidated view of my health info from my tracking devices. More specifically, there should be a way to compare/correlate tracking (e.g.: steps vs calories vs weight). Know that the Apple Health app already presents a list of health measures independently with sparklines.

Thank you for pursuing a consolidated view. I have been starved for a way to better understand my quantified self.