Hi everyone, I’m currently working on implementing a personal life dashboard that will be updated in real time. One of my biggest gripes with all this tracking software is that I rarely check it, so by having a dashboard that is visible at all times, I’d be able to adjust my behavior in real time. The idea would be to have a tv monitor hooked up to my raspberry pi running flask. I’m currently in the process of selecting KPI’s to monitor, so far this is what I have:

Any other metrics that you think I should monitor? The key being that its all running in the background of my life and whatever source that’s collecting my data would hopefully have an open API or would be something I could build a scraper for.

Love this idea! Have been thinking doing something similar myself. Would it work on google sheets or other channel also?

Resting Heart Rate would be really useful - if you have a Fitbit or other HR tracker. I see mine going up & down with diet, heavy exercise. Even lack of sleep seems to impact.

And time slept would be really useful of course!

Sounds like a fun project, but chances are you’ll stop looking at your fancy dashboard within a week or two. Most of the metrics mentioned are neither “realtime” nor immediately actionable, so it might make better sense to review them periodically (i.e. once a day, week or month) instead.

Hey Eric, you’re right most of the data would not be immediately actionable however a few of them would be. For example Rescuetime data is updated in real time, so you can see in real time how you’ve been spending your day. If it hits 2pm and you can see on your dashboard that you’ve spent the majority of your time on reddit/facebook/etc. and your unproductivity far outweighs your productivity you can make the proper adjustments. Same with number to-do’s complete, steps, etc. you can adjust your day accordingly when you see that you aren’t hitting certain metrics.

It also serves as a good reflection at the end of the day, by looking at my dashboard I have a better sense of how I spent my day. Here’s what it looks like so far, it’s already updating in real time for me, now its just a matter of connecting a few more API’s and spinning up some charts to make it more intuitive. 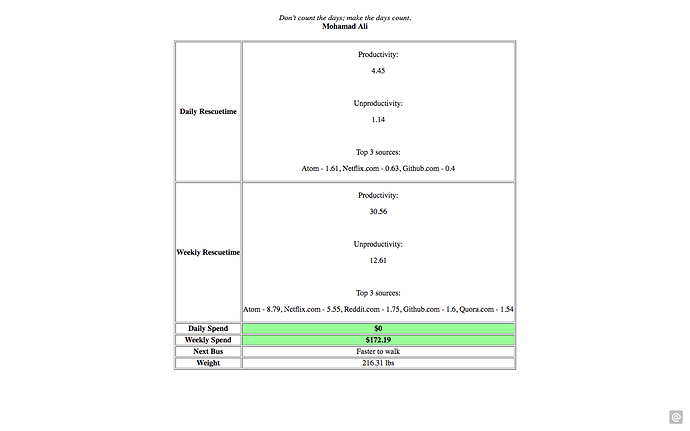 RescueTime’s productivity metric never made much sense to me (an hour in a code editor can be less productive than an hour on social media), but that’s another discussion…

Fair point, its a bit of a vanity metric for sure - that’s why I also pair it with Wakatime (tracks your programming). At the end of the day there’s no perfect way to track productivity, but rescuetime at the very least offers insight on where you’ve been directing your attention.

Agreed, it’s very useful to know where you’ve been spending your time, or even just how much time you spend on your computer (and if it matches with your perception and goals). But again, this is something I personally would rather review from time to time than monitor in “realtime”,

@logos - did you try the Qbserve app (I think it’s desktop only)? You could find some inspiration there - I am using the Qbserve since the beginning and love it. Here’s my dashboard from October: 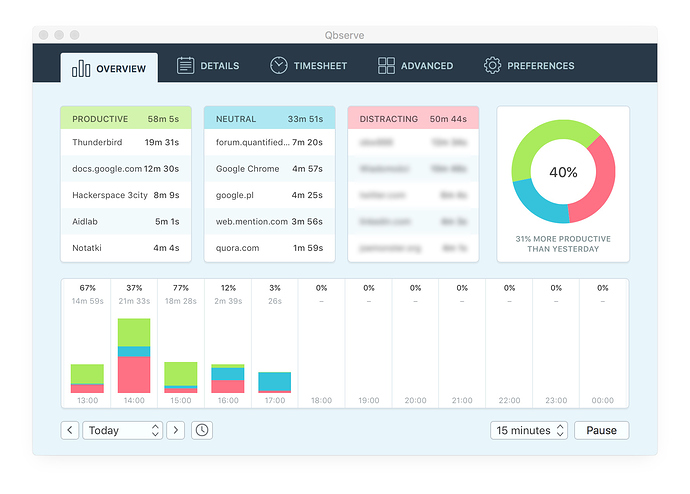 Cool idea but I’d rather see something that’s more an open source integration on the aggregation side.

I agree with @ejain that this collected tracking data is more useful periodically rather than real-time. You are using data to understand something and trends, then to track changes following an intervention or behavior modifications, i.e. like a score board.

I do find that certain tracking can be useful when it does something actionable like a notification or blocking sites at certain thresholds, which you can do with RescueTime or FocusTime. One interesting implementation is Sloth Worth (https://qotoqot.com/sloth-worth/) which shows a cost icon as you spend time on certain sites.

Could you explain what you mean about “something that’s more an open source integration on the aggregation side”?

As far as your point goes about it periodic v.s. real time, I have concrete goals related to hitting my steps/focus time so seeing that information in real time lets me know how close I am to hitting what I need (i.e. I have an internal goal of walking 5000+ steps a day, so I’m more likely to not to take the bus if I see I’m far away from my goal, I also have an internal goal of programming 1h+ a day, so if I see that my daily goal isn’t there yet I can adjust course accordingly). Other data is also pertinent for me to see in real time (i.e. whats the weather like currently, how far away is my bus, how many tasks do I have outstanding in my todoist, etc.)

Right now I have a data dump of information that’s live on heroku - still fixing the real time update because for some reason it broke when I pushed it live, once that’s fixed i’ll be adding dynamic charts which update in real time and integrating any other api/web scrapers as necessary.

@logos I mean that I’d like to see something that aggregates and standardizes data from various different sources. The actual visualizations, data analysis, app, whatever would be an extension of a personal data repository.