Hey Everyone. I am new here. What are everyones thoughts on tracking health markers and then getting personalised nutritional supplements according to what is tracked. Are people doing that? What are you using to test nutrient levels? Buying supplements seems crazy to me if I cannot test if they are working and so I was wondering if anyone has been able to hack anything together.

Welcome, Kevin! Have you checked out Inside Tracker? Their web site is full of suggestions for what supplements their science says should work for you.

If you are going to take supplements, measuring if they are having any effect (or if you’re just wasting your money) seems like a good idea™.

If you don’t have any obvious deficiencies, you can still do blood tests to look for anything that might be a bit too high or too low and that is currently thought to cause problems in the long run. Ideally you’d address anything you find with lifestyle changes, but if that fails (e.g. because you just can’t get yourself to eat sardines for breakfast every day), supplements can be useful.

For example, here’s a chart showing my vitamin D levels (tested through Arivale) and my supplement intake over the past few years. I think I figured out the dosage that’s required in winter to keep my levels stable after spending summer soaking up sun, but not all brands are equal, and I’m just testing a slightly cheaper one… 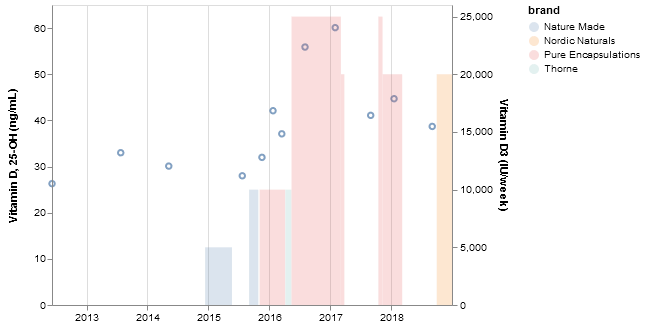 There’s also Baze (https://www.baze.com) vitamins. They provide a device to collect a tiny blood sample in the convenience of your own home. After they do their measurements, they send you personalized supplements. Then every three months they send you another device to get an updated blood sample, allowing them to further tweak your supplements.

Has anyone here used Baze? $99 for 8 tests (incl vitamin D and omega-3) sounds like a great deal. However, the blood collection device they use collects only a 100uL sample, so I wonder how accurate the results are. Also, as far as I can see, their blood collection device has only been approved by the FDA for a single test, A1c.

I don’t take vitamins but I was intrigued by the Baze service and collection and measurement system so I signed up for one month. I toyed with the idea of signing up for a year so I could see how my test results (and corresponding daily vitamin packet) would change over time, but my intrigue wasn’t up to that level. I also toyed with the idea of being an N=1 “control” by signing up for a year and doing the tests and such but not actually taking the vitamins. I ultimately decided against that as well.

I also did a quick web search to learn something about the minimum volume needed for an accurate blood test. I found a link saying that for newborns, about 0.1 ml (100 microliters) per test is commonly used. I think I’ve been told that when doing experiments with mice, half of that is usually plenty, and for some tests, ten or twenty microliters is enough. YMMV

Obviously, it would have been more useful to collect my blood sample for the Baze service at the same time as collecting a sample for an independent testing service.

Has anyone here used Baze?

For the record, I took Baze’s blood test this March, and the reported vitamin D levels matched those done by LabCorp a few days earlier. Didn’t have any reference for the other tests, like omega-3.

For the record, I took Baze’s blood test this March, and the reported vitamin D levels matched those done by LabCorp a few days earlier. Didn’t have any reference for the other tests, like omega-3.

Baze now charges $200 for their test, and they’re no longer allowed to show actual values, so it’s no longer such a good option for QS projects

Baze now charges $200 for their test, and they’re no longer allowed to show actual values, so it’s no longer such a good option for QS projects

Baze offered to try and forward the actual results to my primary care physician; let’s see if that works…