A couple of days ago, a post appeared in the QS facebook group to advertise the pROSHI, a handheld device that attaches to a pair of special googles. It promises to “enhance the brain’s functionality and to inhibit (implode) anomalous events”, to “cause the brain to evaluate and repair itself as needed” and leads to your “brain’s functioning at optimum levels and peak performance” (among others, see below) at a price point of two thousand US dollars.

The only technical description I could find was here:
http://home.comcast.net/~truthsucks/more_proshi.html
it provides us with information on physical properties of the generated flicker. The frequency distribution of the flicker looks somewhat like that of EEG, while the timecourse of the signal does not.

The testimonials in the website seem very promising and it’s certainly not the first time we’ve hear of positive effects of photic stimulation:
http://archive.makezine.com/10/brainwave/ 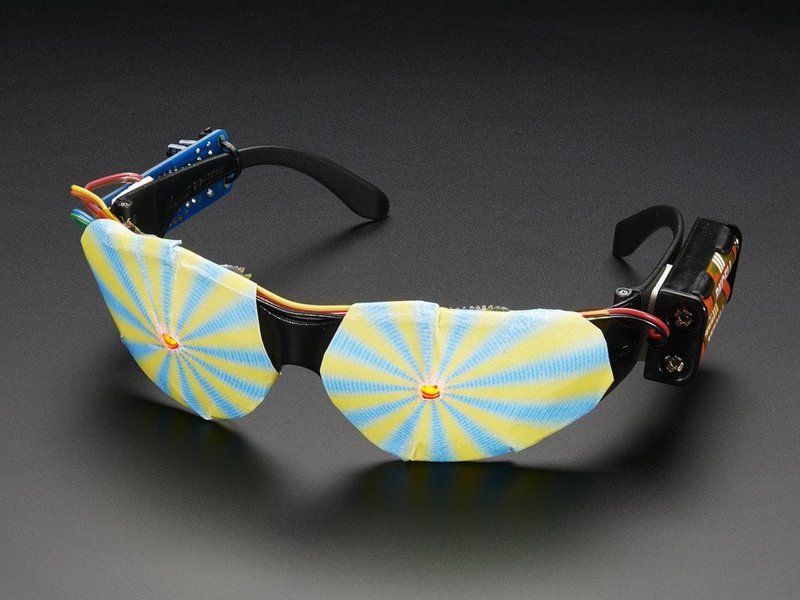 The Brain Machine provides you with a fun, easy way to meditate, all the while being very photogenic! They work with lights and sounds that pulse at a 14-minute-long meditation sequence of brainwave frequencies. Your brain synchronizes to this...

The effects of photic stimulation on visual imagination imagery in meditative states have also been scientifically studied. One example is Richardsen & McAndrew (1990) who found that, especially for people who are motivated to explore inner worlds, there are beneficial effects of photic stimulation on complexity of visual images.
This could theoretically suggest to some beneficial effects in other areas due to, for example increased meditation depth or enjoyment. Some people might sleep better, there is some research that shows that people can fall asleep faster using similar methods. More enjoyment during meditation leads to more and better meditation, leads to decreased stress, leads to better self-maintenance, better health, alleviation of psychosomatic problems and increased quality of life and so on.
So in a way, it’s conceivable that a photic stimulation device can on an individual level make the difference between being ill and being healthy.

However, the pROSHI goes a bit further then that:
A) it promises to be better then comparable devices:
“ROSHI Products have been proved to be the most powerful tools, in Neuro/Bio Feedback practice in the United States and all over the world.”

B) earlier versions needed an EEG amplifier to work, while the new generation can do without.

c) it claims to have a very unique method based on principles that are named but not explained. I could not find any further information on the following terminology and would like to learn what they are referring to:

Well, these are mostly terms that do occur somehow somewhere in the literature on EEG and oscillatory activity in the brain in general, but they’re not used in the same way as far as I can see:
For example on the importance of ‘phase’ (whether the EEG is waning or waxing): A lot of research has been done about the role of phase reset for crossmodal integration. Grossly oversimplified and in short this research says: When a noticable (or strong) stimulus (such as someone shouting, or lights flickering) comes in through the senses, the phase of an ongoing electrical activity is separate areas in the brain is sometimes ‘reset’: (see Mercier, 2013, but not always, see Mazaheri & Jensen, 2006)
[Image: Phase_resetting.png]
This is a mechanism that allows the different areas (which need to work together to create a coherent image) to reorient themselves to new tasks and new information. (Sieben, 2013) It is generally believed that cells that are contributing to the same perceptual construct need to be active in a common rhythm (Tallon-Baudry, 1999). Thus it doesn’t seem far fetched to believe that there is a tangible connection between flickering lights of specific frequencies and alteration of perception (if you’re willing to overlook the oversimplifications and assume all these phenomena are indeed connected. I’m still assuming that the device provides benefits primarily by improving upon the benefits of normal meditation or rest.)

The connections between the claims of the device and the science in peer-reviewed journals is just not really there or at least I’m missing a big chunk of the puzzle. If I do, please let me know.

This is an area of research where there’s really a lot of debate in the scientific community and the origin and dynamics of EEG are still a mystery for the largest part.

Another of many examples that I found baffling: “The MagStims also stimulate the midbrain areas and focus on the limbic system. Use of the pROSHI with MagStims placed on top of the head at the sensory motor area has a more direct connection to the C3 and C4 areas which are influential in controlling the work of the eyes through the deep inner areas of the brain.”
There is no evidence that even strong magnetic fields can directly alter any limbic structures. This sounds like a nice explanation, but it’s a highly implausible explanation for any effect. If we could alter brain function in the basal ganglia with small magnetic fields, believe me we would… They don’t reach far enough into the brain tissue and are not focal enough to be aimed at anything in particular. As for some 'direct connection

If the device is really that effective, the inventor of ROSHI should patent his method: This way it could be mass-produced so that more people can use it and because patenting requires disclosing what’s going on inside, the device can be tested independently.

And now I have an open offer for Chuck Davis: If you send me two pROSHIs I will do my best to find qualified undergraduate students to test it against a placebo intervention (random flicker pattern) next time I have a chance. You will get one back unharmed, the other will be modified as a placebo. (You’re free to send me an already modified version, then you will get back both unharmed.) The next possible time for me to do this is between February and June 2014, so you have until then to decide whether you want this. There are several methods and approaches to what and how it should be tested, we can agree upon that later. But yes, I’m comfortable with using EEG as an additional outcome measure.
And I can promise you a sound approach: there will be close supervision, it will be go through the ethical review board of our university and it will have to stand up to peer review.

As of now I’m not convinced by the device, primarily because it all SOUNDS like pseudoscience to me. But I’ll turn around 180° on this if proven otherwise.

References:
Richardson, A., & McAndrew, F. (1990). The effects of photic stimulation and private self‐consciousness on the complexity of visual imagination imagery. British Journal of Psychology, 81(3), 381-394.