I’ve just released a new app on the iOS app store and I’m very interested in getting feedback from the community on it.

The app is called Tasks & Measures. It is a To-do list and self-tracking combo application that lets you

For instance, marking your daily touch typing lesson (task) as complete updates the log of how much time you’ve spent on that activity. You can then chart that effort against your current words-typed-per-minute (measure) which you can update either each time you complete the task or as infrequently as you want.

While it is an active tracker, the act of crossing items off your todo list creates the bulk of the log entries without any additional work.

Its free and available in the US app store now.

Here is the direct link to it in the store

Thanks for posting! I’ve been looking for an app like this.

Am I limited to the categories already provided within the app or can I make my own?

Since I already have a task-management system I’m comfortable with, I’d rather not try to squeeze my category classification into yours, but I can’t seem to figure out a way to edit the category list.

Categories are fixed right now but they are much more like ‘task defaults’ than categories in other apps. The idea is that you would choose the category ‘exercise -> run’ to create a new ‘Run’ task with some intelligent defaults like ‘repeats 3 times a week’, lasts for ‘.5 hours’, default task name is ‘run’ .

If there was a task you wanted to add related to exercise that wasn’t in there like say zoomba, you could choose the category ‘exercise’ and just name the task zoomba. For a task thats totally unrelated to existing categories you just choose the category ‘other’ (I should probably just make that the default category) and name the task whatever you like.

I do have the ability to add new categories remotely from the server so if there is a desire in the community to have a zoomba category I can add it without pushing out a new release and everyone will pick it up. I can do the same thing with measures if there are ones you’re interested in tracking that I don’t have listed.

Change up, reorganize and invent new categories and measures to your hearts content right from within the app

A new version of Tasks And Measures has been released and is available for FREE.

It adds a new Category Rollup Report (that in fairness, currently costs US $1.99 ) that shows the time your spending on tasks rolled up (broken down ?) by Category. For example, suppose you’re trying to keep up a certain level of activity during the week, but what you do differs on different days, you can get a rollup of all the time you’ve spent exercising as well as how that breaks down between going to the gym, running, biking etc

Alternatively, if you need to prove to a spouse / housemate just how much time your spending on chores it can help with that too

The app is free but it is only available in the US, UK, and Romania as I’ve been rolling it out slowly. If you’re not in one of those countries, let me know which one to add and I’ll do that (as soon as I can make changes on the store … Apple has blocked all changes until the 28th or something like that)

Version 1.2 has been submitted to the app store for review. T&M is now an iOS universal app that takes full advantage of iPad screens. The larger screens makes it easier to spot (unfortunate) trends in your data than it would be on a mobile device:

iCloud sync is built in so you can use an iPhone for data entry on the go and then review charts and graphs on an iPad.

T&M Version 1.3 is now available on the App Store. It includes two major enhancements to reporting over the previous versions (ok, the first enhancement was in 1.2 but I didn’t talk about it here)

Looking for fitbit users (almost doesn’t matter which product) who have an iOS device and would be interested in helping alpha/beta test integration of Tasks & Measures with their portal. The intent is to give people more insight into how many steps / calories / floors etc tasks from their daily routines are worth (mowing the lawn, doing laundry, walking to work) as well as provide rapid syncing of items like weight data between the fitbit portal and T&M. PM me if interested.

Tasks & Measures 1.4 is out now! If you use a FITBIT device, you can chart measures from the FITBIT platform such as steps taken or calories burned against time logged tasks such as running, walking, or doing chores in order to help gauge the impact of those activities on your overall activity level.

Tasks & Measures 1.6 is out now with a bunch of new goodies

Its still free so go ahead and grab it today!

Its got a new Health Intraday Chart to let you see the activities you completed in a day overlaid with data from Apple’s Health app: 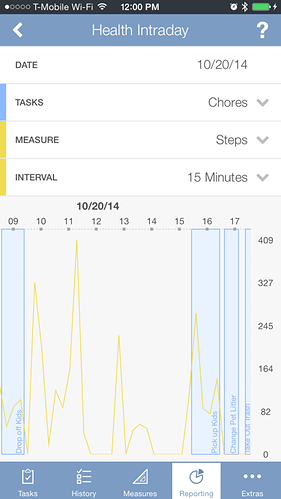 And a new Event Detail chart that shows you the high resolution Health app data (minute by minute) recorded while you were doing an activity like using an elliptical or taking out the trash: 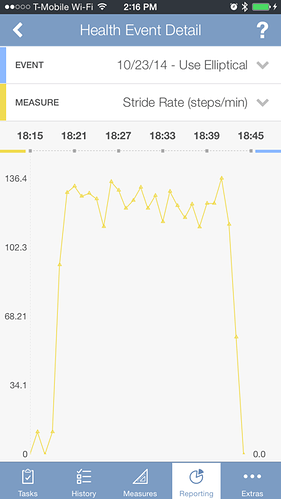 They are available as in app purchases but they are both currently free.

I use Fluxes for organizing daily to do lists, tracking progress and creating report. We also use the tool at work for managing team projects. It’s a completely free tool with excellent features. I would rate it better than Trello and Asana.