FWIW, I still use the Zeo App w/ a dedicated iPhone 4 w/ iOS 5.x.x.
It exports data via email, which is visible by Woody’s PC (Mac or Win) App.
Woody to the rescue
Thus, if you think Intel/Basis provided everything you need, give it a shot, but I would dedicate an iOS 9.3.x to the App/Device if you’re serious.

Fyi, just received my refund today (took about 2 weeks). Now what should I spend it on?..

Whoop seems to have a nice set of sensors comparable to Basis, but unfortunately they have no plans to offer API access, which for me is a dealbreaker: 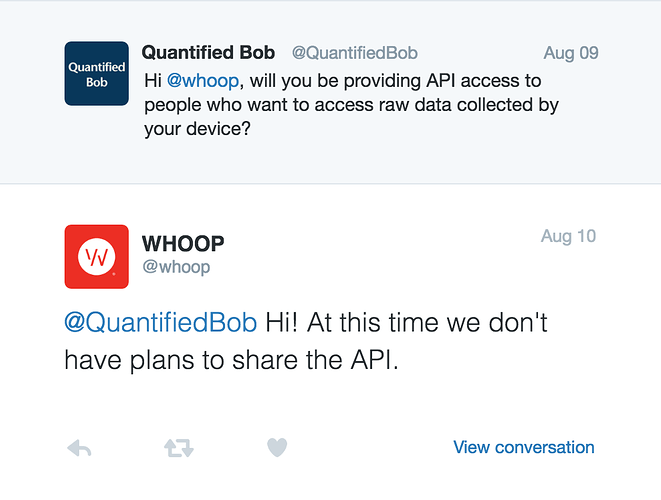 +1 I’m looking for something that has an API AND LETS ME ACCESS MY OWN SLEEP DATA THANK YOU VERY MUCH!!! >: (

In fact, I think this community could really benefit from a product roundup section. Something where everybody that offers something is listed, with the pros and the cons (I know, subjective… blabbla) but just somewhere to point people to when they ask “What wearable should I get?”

Many of us in the same boat here.

I would be willing to pay 500 USD for something like whoop if it ticked all the boxes - including API access to the data.

I emailed basis. Got a reply that they are following up and will let me know with regard to data systems. Will keep you updated when I hear back again.

Sorry for the late reply to this discussion full of great ideas.

First Basis confirmed me that both Peak AND B1 services will be shut down on Dec 31st.

As for an alternate to Peak/B1 I add a +1 to setting up some kind of Zeo like approach where the data can still be obtained from the device after the Basis servers are turned off.
But from my perspective the only data I have really used out of both devices is the heart rate while sleeping. As crazy as it sounds I haven’t found another sleep tracking device that provides data every 1 minute. With the exception of NeuroOn, which I haven’t tried but is tempting (not advertising it, just trully curious as it is a different type of device than a wrist one)

Neuroon Open wakes you up energized, improves your sleep and helps to experience lucid dreams.

Since I am using other sleep trackers to track my sleep onset time, the only valuable data provided (in my opinion), I am considering getting a Wrist Pulse Oximeter instead.

I have a spreadsheet type of list of sleep trackers, with about 70 different devices listed. So I would be more than happy to help contribute to a product roundup section. As I have tried devices over the years I realize there is a lot of junk in that sleep tracking device field. And it is hard to get info on details that matter (to me), like the frequency of heart rate data at night.

wow. Got a very quick, short no. They don’t want to release anything.

I’ve got a A basis peak.I’ve applied for a refund but as I imported it from Australia I’m not sure they are coming to the party with the refund. They arent sold here.I would love to know of you can continue to use it via a hack but I 'm all new to this and have no know how.

The sleep data has parallel reliability with an industry sleep test which is what attracted me to it in the forst place. And the usual fitness data was great.

I did see this Angel Sensor which is purely open source and against having your data snitched for neferious purposes. However its first model has only just been released and is for app developers rather than end users. It sounds good but needs time.

what do others think?

I own 2 Angel Sensors (original model that was crowdfunded, and the newer model they subsequently released). I was excited at the promise of an “open” piece of hardware, but unfortunately both are still in their original boxes.

I have seen them provide near zero community support for their products and software - they have all of their code available on GitHub - https://github.com/AngelSensor/angel-sdk , but the code has not been updated in months, and there are numerous bugs/issues from the community. There are even reports of people who crowdfunded the product 2+ years ago still not receiving their devices.

Due to lack of updates, frustrated developers have forked the official GitHub repository and created their own “community edition” where people can submit issues and pull requests - https://github.com/AngelSensorCommunityEdition/angel-sdk-community

Too bad. I’m not going to invest any of my time developing for an unproven platform until I am confident it will be around in a year.

A roundup would be a great community resource!

We tried a “QS Guide to Tools” a few years ago, but found that keeping up with changes and eliminating low-quality spam/promotion contributions was pretty hard. That’s just to state the challenge.

There was a good discussion in 2014 of some existing resources in this topic: “A new tool guide for the QS community.” I’ve added a comment to restart it.

That saves me going down the Angel Sensor line. Lets see how it pans out. this wearable tracker thing is full complexities.

@Elo Here is that spreadsheet:


This is not a complete list, neither fully up to date. Just added Angel sensor to it.

That’s a great list. I wish it had battery life in it too. And two other things I really care about - data export, and sleep tracking.

Looks like the Microsoft Band is the only option with GSR and good sleep data. but it only has 48hrs of battery life.

I just want a thing that I can wear all the time, charge like once a week and it can track my steps and my sleep. Anything like skinTemp or GSR is a bonus.

Oh sorry to not mention it: all of those devices are sleep trackers. I did not include devices that were only for activity tracking as I am solely interested by sleep tracking.

And yes I didn’t explore the data export part since I have come to the belief that not much useful data is being made available.

If you are simply interested by how much you sleep I would simply recommend a smartphone based app. After 100s of nights using bed-based, wrist-based and smartphone apps concomitantly I don’t get any more valuable info with one than another. I have very little belief in the accuracy of the sleep phases determined by those devices. For example 90% of my sleepwalking is when I am sound asleep, according to those devices. And in any sleep stage possible, when it should only be during the NREM part of my sleep.

Anyone buy a replacement yet? Any recommendations?

Microsoft Band looks like the replacement I will go for, but I am going to wait a few months. Hopefully something new comes out before the Xmas period at the end of the year.

As an interim solution (until next generation of devices come out, hopefully at the end of the year) I’m going with a combination of Fitbit Surge for passively-collected biometric data plus Jawbone UP3 for sleep tracking (includes GSR and Fitbit Surge doesn’t identify sleep stages). Not ideal, but both devices/companies have established APIs. Would have went Garmin but lack of an open API was a dealbreaker.

Thanks for the info on the Garmin - crazy they have policies like that.

Was wondering would it be possible to get that data displayed on a pebble watch in real time? Did a bit of googling & didn’t find anything