Wonder if anyone fancies pointing a stick and laughing at a little toy I’ve started to create?

When complete it will detail the maths behind each calculation.

Android only for now. 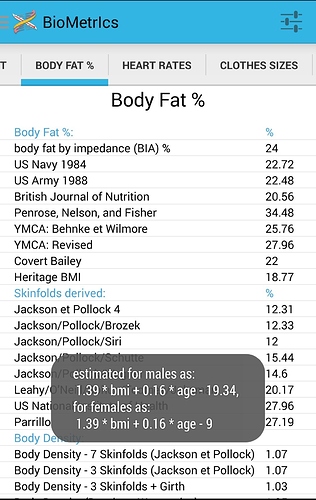 No android device, but I like the concept. Benchmarking yourself against other groups.

I am installing your app now. This is very much what I was hoping to find - all these measurements I never knew existed - thanks. The one question I have is which health platform do think will capture the largest proportion of metrics as your app will store and which of the platforms are you planning to make compatible for use with your app.

The one question I have is which health platform do think will capture the largest proportion of metrics as your app will store and which of the platforms are you planning to make compatible for use with your app.

Good question, Google Fit has potential, as it in theory it can take whatever you choose to throw at it, Android has the largest market share, and the API is Web accessible, so also good for iOS, Windows, OsX, Linux…; unfortunately Google’s terms prohibit the storing health related data, but fail to define exactly what health related data is. Under Armour has potential with their combination of: {MyFitnessPal, Endomondo, MapMyFitness, Record…} and are present on iOs, Android, Windows, Web… but it may be a year or two for the different Apps, API’s, and backends to be merged into a unified one stop repository. The likes of Withings, Adidas and Polar are closed shops, I have a cupboard full of their nice and shiny (free) toys, but they don’t want to play, but wish me well. There are aggregators such as Human.API and Open mHealth, that I could offer a hook up for, but not sure I want to at present. So for now that leaves Microsoft and Apple Health, that will accept the data the app stores, unfortunately one is unloved and virtually un-used and the other will only play with iOS8+ devices.

Anyway you have the ability to export all the data you input, in CSV or JSON format, so are free to play with it in any toy you have access to.

@arober11 neat product! BioMetrics works great on my Galaxy S5. I like how you incorporate multiple metrics, for example 14 different published estimates of my ideal body weight. Where did you track down all your calculators?

Is this an Android native app?

Why are you hesitant to interface with HumanAPI and Open mHealth? Just curious if you have learned some issues.

What is your current status and roadmap?
Nice work!
Dave

The regression formula were simply picked up from Googling each term in sequence. Per the About page, we appear to have an army of academics who publish near annual variants on most formula. A days Googling got me 730+ published and apparently peer reviewed equations to play with (spotted a few typos in the published works, that I’ve since had confirmed by pestering a few of the authors).

In theory the App could support the import / export of Open mHealth JSON, but like the Google Fit Schema, it’s currently only supports a limited number of attributes. Both only cover around 20 or so of the 130 the app can log, so for know I’m just allowing the import / export in either a flat CSV or the custom JSON format. Though it probably wouldn’t do any harm to allow a partial import/export, in the respective formats. I’m also cautious as Google’s terms and conditions explicitly exclude health related data being stored on it’s servers. Similarly HumanAPI doesn’t support everything, and they’re rather illogical, Height and Weight are classed as Wellbeing data, while adding a BMI number makes a dataset Clinical data, and there are many rules and reg’s if you want to become a processor / conduit of that type of data.

The immediate Roadmap is pretty much as set out in the About page, been playing with some visualization and styling bits for a while, a few months, but they’re totally subjective so will appear when they look good, whatever that is.