Has anyone else found doctors uncooperative in support QS endeavors? How to overcome?

In the past, I’ve run into several roadblocks in dealing with MD’s regarding quantified self. I am told that doctors don’t order useless or harmless tests. I politely respond asking them why the test is useless and harmful? At that point, I am usually shut out and given something to the effect, “I won’t do it.”

What I don’t understand is why doctors are very against this? How could getting more data hurt? Sure, you could have a test that comes back a false positive, but that’s why tests have sensitivity and specificity associated with them – you have to test more than once and stack up against other evidence. I could also understand people getting tests from Naturopaths that are dangerous (H2O2 infusions) or useless (like candida for example).

I can’t imagine that there are a plethora of uneducated people going to MD’s asking for unnecessary tests. You would think that the champions of health would want people to be concerned more with their health. From a a capitalistic standpoint, getting these tests generates more revenue for the labs which are usually associated with the hospital.

For my next question, how do you deal with this? Is there an approach you find works better or do you simply find a new doc?

There are many aspects to this, but information that one does not know what to do with has liability. Doctors want information such as a clear test, with a clear actionable result, that has been standardized. This path has reduced liability. Obviously, this fights with both innovation and individualized medicine. Additional information needs to trigger a change in advice or treatment, otherwise what does one do with it. Doctors have no time for research. Either operating, giving pills, or telling patients what they have to change, under lots of time pressure, is the only choice.

Probably educating yourself works better than finding a new doc, if yours is willing to listen. We have a duty to take responsibility for ourselves. The doctor can only guide.

Doctors have no time for research. Either operating, giving pills, or telling patients what they have to change, under lots of time pressure, is the only choice

This view blows my mind. You would think someone would collect stats at the clinic on patient data to optimize care. I’ve often reminded myself lately that doctors are not scientists (aside from being called doctor, i wish there was a different term for MD) but engineers of the body. This is fine for most things but I have sometimes troubling condition that I have yet to find someone who really wants to spend the time and work with me. I have the money to get all sorts of tests done but I need to get connected to the researchers.

Probably educating yourself works better than finding a new doc, if yours is willing to listen. We have a duty to take responsibility for ourselves. The doctor can only guide.

Completely agree. We must be a participant in our own rescue I always say.

This is an example of what you describe. Not considered by the doctor, whom Eric Topol kindly does not name, is the benefit of learning you do not have a feared condition.) 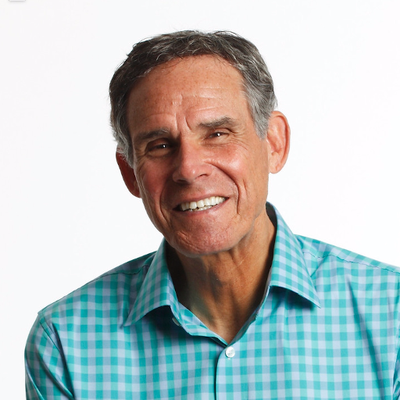 Interesting email I received on this topic, sharing w/the individual's consent. Someday it will be part of the physical exam, esp w/ this hx https://t.co/RrEEL3F13X 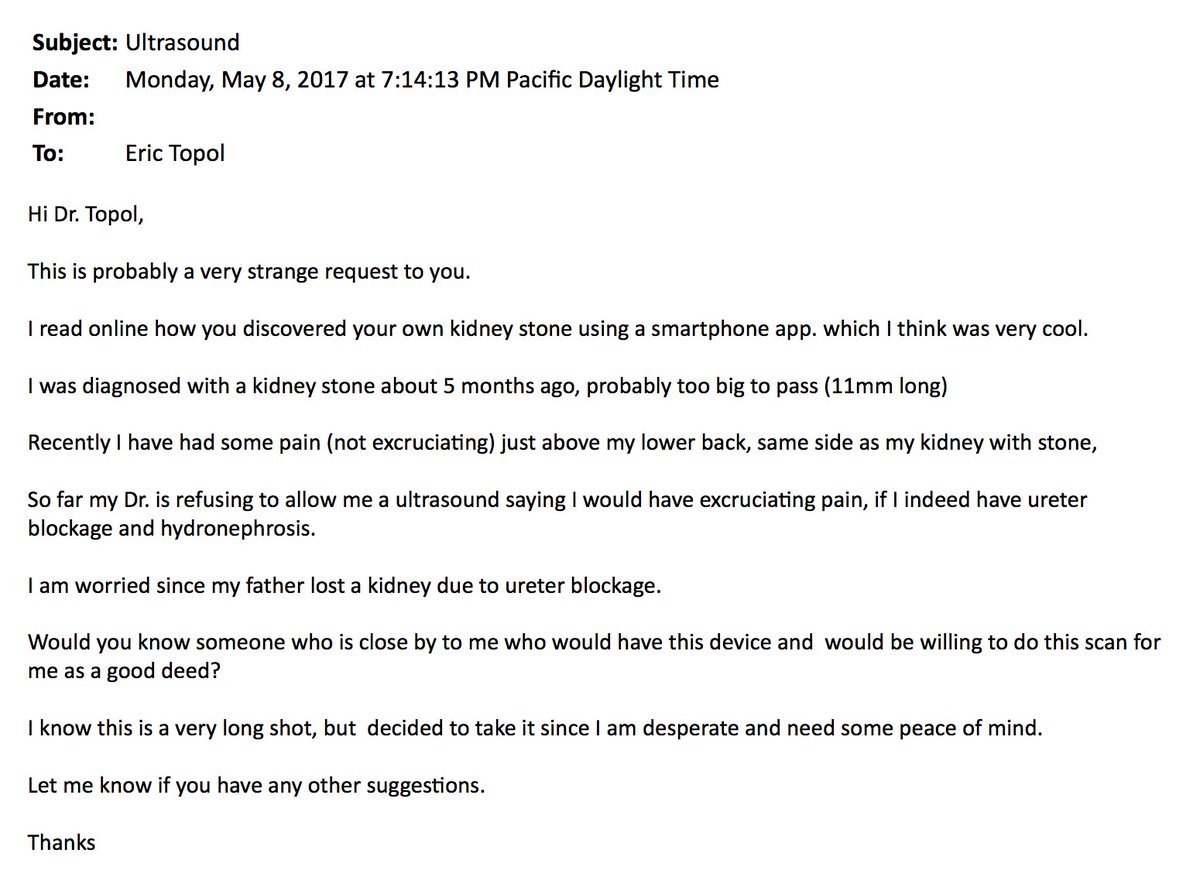 In defense of Doctors, what would you do if you have 15 minutes or less with 40-50 patients a day? You only see mostly described symptoms and all are begging to have their problem solved which is mostly a problem of lifestyle, obesity, lack of movement, complicated genetics, and even more complicated physchosocial and environmental causes. You signed an oath and truly want to help those asking for help. Result - too little understanding and too much surgery and medication (by the way, this is also the way to make money).

@Marc_Mathys I get it, but please don’t take the next part personally. But, I want to nip this argument right in the bud.

The argument is a straw man for several reasons:

I think something’s that often missed in patient care is peace of mind.

I’m reminded now of a blood test for IBS-D, called IBSChek. One of the researchers who developed the test, Mark Pimentel, tells a story of how an IBS patient he saw for 10 yeras found great relief when the test came to market and came back positive. Mark initially told the patient something like “why bother with the test? we know what this is? ive been seeing you for 10 years.” The patient responded, “now i know.” For someone with chronic GI pain who’s in the balance between having IBD or having some syndrome, I’d hedge my bets on overtesting for IBD given how it effects QoL and mortality. Having this knowledge of IBS prevents more testing (saving money) and gives the patient peace of mind (which is a really really nice thing to have in life).

Sadly, from the perspective of an emergency physician, this patient’s doctor with the kidney stone is simply committing medical malpractice. He or she has a misguided and factually incorrect belief that blockage and hydronephrosis would cause excruciating pain. We have seen dozens of patients where that’s simply not true. As evidence, what does the doctor think of the fact that the patient carried an 11cm stone for months without excruciating pain? Does the clinician really think a litttle backed up fluid is going to cause more pain than a stone?

In the latest study, 1,000 patients a day die from preventable medical error and 10,000 are injured. Healthcare is the current third leading cause of death today behind heart disease and cancer. Sadly, many doctors don’t know enough to even know they are wrong.
You don’t have to be a victim. You also don’t have to spend your time convincing them to be open to learning knowledge to which they should already be open to learning.

Some of the best learning I ever had came from my patients. If your doctor doesn’t order a test you request without giving you a good reason, get a new doctor. They’ll catch on eventually that medicine is a partnership not paternalism. In the meantime, feel free to call me. I will order your test.

I want to state clearly that I think doctors have a hard job and they generally do wonderful at it. My comments above don’t mean the whole system is broken. It also doesn’t mean that I think the doctors need treat patients like clients that should be wined-and-dined for every complaint and that they shouldn’t protect themselves from malpractice. I do not want to throw the baby out with the bathwater.

However, there are improvements that can and should be made to the system IMO which would help address chronic illness much better especially those who can pay for it. I would like to have a society in which everyone has access to health care but we are not there yet. However, those that do have money should be allowed to invest it in ways that help the process of innovation and care move ahead in the hopes that someday everyone will have access to care and the care will be highly effective.

There are high end medical groups that you pay to join, essentially pay for access to the best doctors. They also do an extremely thorough physical upon joining and help you deal with whatever ever issues you have.

Google concierge medicine or http://www.mdvip.com/. Not sure where you live.

Thanks. It looks like the starting prices is $1700. That’s not bad!

Do your due diligence! The cheapest is unlikely to be the best. Go visit them and see what you think. They are very well organized, which goes along with all that this means.

In some states, if doctors order tests, they are responsible for interpreting the results and treating anything that requires treatment. If the doctor isn’t familiar with the tests, he/she may not be willing to order them for tjat reason.

Do you know where you can find the list of states and their directive?

The sort of issues mentioned in this JAMA article from 2004 can’t help. Read it and weep, about a well-meaning doctor successfully sued because he gave the patient too much information. http://66.199.228.237/mofo/pdf/evidence_based.pdf

I really wonder how much of a one-off this is and what the other side of the story is. Any other anecdotes?

Wow, sad case. In weighing a big rich institution vs a poor individual bad outcome in court, the individual can win. Almost an insurance concept. Attacking ABM was clever, but disingenuous.