Trying to find the cause of my Brain Fog

Experiment 1: Seeing if Peanut butter was the cause

I wanted to see if peanuts, peanut butter, eggs, olive oil, seeds, cinnamon or paprika could be the cause.

I tracked which foods I ate and if I experienced brain fog in Notion.

I stopped eating peanuts, peanut butter, eggs, olive oil, seeds, cinnamon and paprika for 10 days and then reintroduced peanuts and stopped the experiment after that.

Peanut butter might be one of the causes of my brain fog, but I can’t conclude it from this experiment.

I can’t conclude much, since I also experienced some brain fog in the 10 days where I eliminated the foods, and the brain fog just got worse after reintroducing peanut butter.

Also the sample size was pretty small, so it could have been an incident.

Hi, new to this forum not sure if you’re wanting advice on this issue but posting incase it helps anyways…

I experienced chronic brain fog for years to point it left me unable to drive or remember a page of a book I’d just read. I was suffering from a chronic illness at the time but what helped my brain fog was

-diet, identifying any food intolerances which sounds like you’re already on top of
-breathing exercises, insufficient oxygen can cause fogginess, hypoxia in extreme cases- hyperbaric oxygen chamber if this is a cause
-acupuncture, not sure why but it did help
-daily inversions, things like lying on the floor with your legs up against the wall or doing a downward dog yoga position
-coffee enemas, if you suspect detox could be a factor or you, low glutathione or if have the MTHFR mutation
-supplements which increase ATP, the brain requires a heck of energy feed those mitochondria! creatine, coq10, D-ribose etc etc
-if you suffer from anxiety of stress look into TRE (trauma release exercises)
-checking if your environment contains mould! mycotoxins = brain fog for a lot of people

Hopping on top of what’s already been shared, I find when I’m in ketosis I have almost zero brain fog, opposed to if I’m carb or sugar fuelled the fog settles in within a couple of hours.

Good luck with it bud.

It’s always good to hear what helped other people

Did you track your symptoms and saw these things you mentioned improved your situation, or did it just seem like it helped?

Back then I was not tracking-i think it was a combination of everything I think that helped. I just tried things one at time trail and error style and little by little it helped over time. I think unless you have a bigger issue with your health it might just one factor like environment or food, hopefully less complex than what I had to go through!

Oh forgot it on my list ozone therapy really cleared my brain fog almost instantly after a session- I think this was due to the oxygenation it wa giving me and perhaps the antiviral effects.

I ate 20g almonds each day.

I did experience more brain fog when eating almonds.

The reason for the brain fog before the experiment and after was because I had other experiments that caused brain fog. 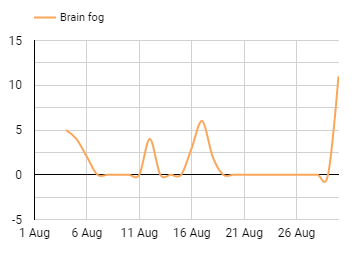 Almonds did seem to raise my brain fog.

But why did I only experience brain fog on some of the days, even though I ate 20g almonds each day?

Maybe the almonds were just too old?

I ate 20g peanut butter in my oatmeal each day for 3 days. 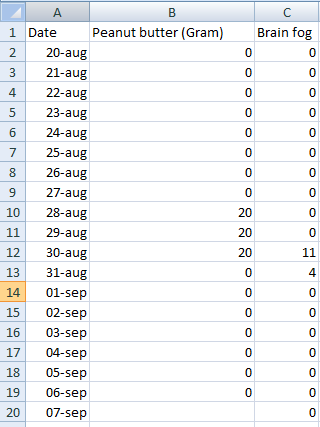 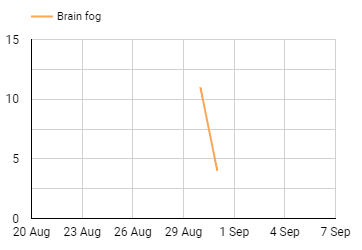 It did seem very likely that peanut butter was the cause of the brain fog, and had a delayed effect.

Maybe the experiment has to be tried again.

How are you quantifying your brain fog? From looking at the data it seems like the scale goes from 0-11, correct?

One suggestion would be to track multiple variables in different columns of the spreadsheet. That way you could do a multiple regression analysis to estimate how much each variable can predict your brain fog.

Once you have this data, you can run a multiple regression analysis with brain fog as the dependent variable (Y), and all the different independent variables (X) that you’re tracking. By looking at the statistical output you could get much more insight into the issue.

If you have access to a tool like SPSS they have a great “automatic linear modeling” function that simplifies the process quite a bit, but it can also be done in Excel.

I don’t use a spreadsheet at all for tracking

I just entered the data for illustration.
I track brain fog from 1-5 and then find the sum for the day. (So maybe this isn’t an accurate way of reflecting the intensity, but it gives an idea).

I use “Track & graph” to track brain fog and other metrics.
Tracking all the food I eat is cumbersome, so I usually just write down any changes I make to my diet: 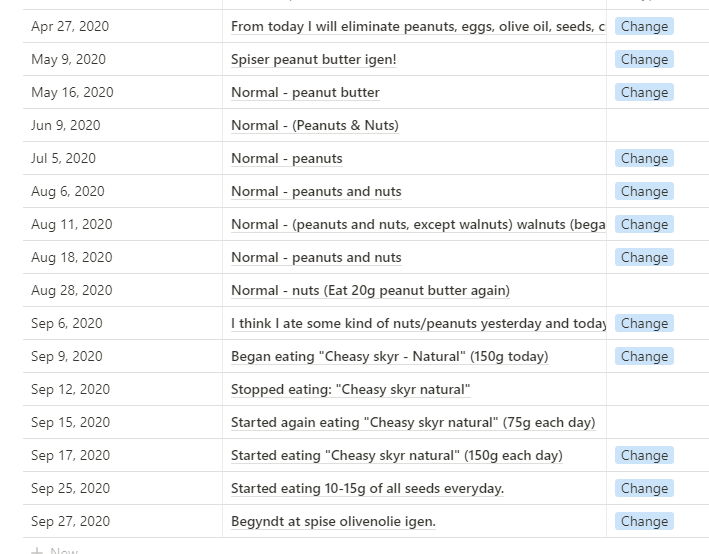 Yes, perhaps I should be looking into multiple regression analysis!

One of the benefits of long-term self-tracking is that one builds up a toolbox of investigatory methods that can be drawn upon when medical adversity hits. One year ago, when Mark Drangsholt experienced brain fog during a research retreat while on...

Have you tried taking an MRT food sensitivity test? I’ve had problems with brain fog too, took an MRT test two weeks ago (which tests inflammatory response against 200+ foods) and it turned out I was most sensitive to a lot of my core diet including wheat and black pepper. I’ve cut them out and feel substantially better.

I dropped in the MRT results below. Most importantly for the context of this thread, I wouldn’t have predicted I was sensitive to most of these foods. 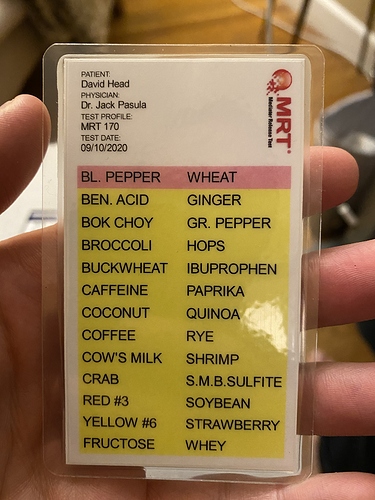 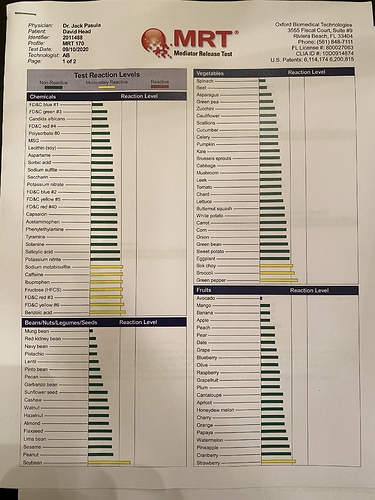 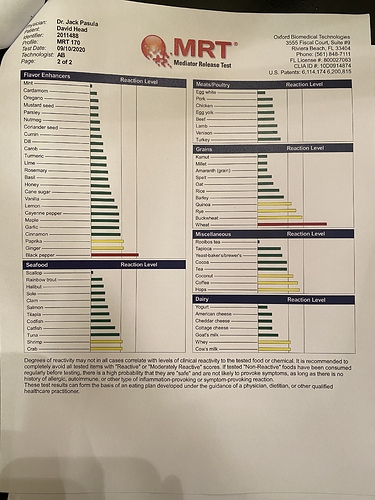 That’s very interesting! He went a long way to uncover the causes.
After watching it I’m considering if I should take some neuropsychological tests!
I know when I have my brain fog and I know when I don’t have it, but I don’t know exactly what it is or exactly how it affect my mental faculties. At the moment I know now that I become confused, unable to complete all my thoughts and it seems to affect my short term memory

I have considered if I should buy one of those food sensitivity tests, but I read some research that indicated they weren’t that precise.
At the moment I’m just eliminating a couple of foods and then reintroducing one by one to see if I detect any changes

Interesting which research did you read? I hired a dietitian and she swears by the MRT test and says it’s the best we have for intelligently planning an elimination diet.

That said, I heard some criticisms about MRT accuracy too afterwards but haven’t looked into them much.

This is some good reading about food sensitivity tests: https://www.healthline.com/nutrition/food-sensitivity-test#precautions

By introducing things one at a time, I’ve discovered that peanut butter and almonds both seemed to be an issue, and Skyr doesn’t seem to be a big issue, but maybe skyr is a problem if I eat too much at a time

Were you actively tracking any measure of brain fog tha you could quantify? Like memory test reslts for example, or even time taken to complete a puzzle? I think reflecting on brain fog without measuring it even semi-objectively leaves you wide open to biases and a bit of the placebo effect. Not criticising your experiment of course; just suggesting you take the next step and formalize it!

Thanks for posting Nicholas. This is a topic of keen interest on the forum, but the discussion tends to be scattered about in various threads. A popular tool for measuring cognition is Quantified Mind, which came up in this recent thread. Definitely interested if you are trying anything in this vein.

Thanks for the link, much obliged!

easure of brain fog tha you could quantify? Like memory test reslts for example, or even time taken to complete a puzzle? I think reflecting on brain fog without measuring it even semi-objectively leaves you wide open to biases and a bit of the placebo effect. Not criticising your experiment of course; just suggesting you take the next step and formalize it!

I totally agree with you! My plan is to try quantified mind

I hope that it will help me more accurately diagnose the problem, be able to describe it to others and also measure if experiments work

Here are my thoughts as someone who knows the brain fog too well, thanks to my ADHD.

Once you figure out the most convenient way for yourself to track when you have brain fog, I suggest you’ll track the following:

My main source of sleep data is currently Dreem 2 but I have used Fitbit, Oura and Apple Watch as well. I have learned that checking the total time spend in bed/sleep probably isn’t enough.

Pay attention to the time of day of your brain fog. For example I have an energy and focus dip around 4-6pm. My mom has the same, so I’d say it is biological/genetic for us.

If I haven’t gotten good quality sleep or have had alcohol two days earlier or have done something that has drained my mental energy, I’ll experience major brain fog around that time, regardless of what I have eaten or done before.

I have found Endel app to predict quite well when my energy levels (and therefore focus etc) is in the rise, peaking, falling or recharging, too.